BLOG: Storm Lee – ‘music is the source of every good thing in my life’

“Soulfillapopkilla is a re-release of my first record. I wrote most of the songs and co-produced it with Madonna/Seal maestro Marcus Brown.

“We met during a songwriting session in Los Angeles while he was working on her ‘Drowned’ world tour and we clicked.

“We got to writing and sketching out tracks and ideas and before long I decided to pay for the making of it myself.

“I sold possessions and picked up extra work just to make enough money to finish track by track.

“At one point towards the end of the record I had to decide between rent or final payment to engineer – needless to say I slept in my car for the next few weeks!

“The songs are homage to the great music I grew up listening to 80s artists like the Pet Shop Boys, Blue Nile, Duran Duran and Prince. Artists that pushed the envelope of style and substance – and so naturally that was my jumping off point for an album.

“As the record grew I started seeing a change in myself also. Realising artists today really DON’T need a big record deal to make and release great music.

“So I felt empowered and self contained. Creating the artwork, track listing and picking all songs as well as producing a few (very low budget) videos – all the things artists usually have NO say in. 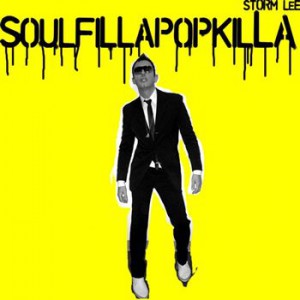 “After I decided to go for X Factor it seemed best I take down any music or video so as not to seem too “professional” and so now three months after the finale I am thrilled to be able to share my music with everyone who cares to listen..

“Music has always been the source of every good thing in my life. Music and the creating process make me feel alive in a way nothing else can. I think when people have a child it is similar. That feeling you have created something more than you. Something that will live longer and is made of you.

“And so Soulfillapopkilla is my best work at the time I made it. It is definitely rough around the edges but a soulful and simple record none the less – tons of ear-candy and songs I am proud of.

“Post X Factor, I started writing a new record and that is more bombastic and confident but soulfillapopkilla is for my fans! For those who believed in me and saw through the silly make up and hair and have been asking – not demanding music from me which I am happy to oblige.

“This record is for anyone who needs a dose of 80s electro dance rock. And hopefully I get to come over and perform it soon!”

Soufillapopkilla will be released on iTunes 10 March.