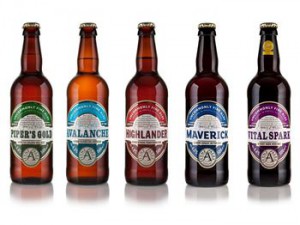 A SCOTTISH brewery which employs just seven people has been named as one of the UK’s most effective brands – putting it ahead of some of the world’s largest companies.

Fyne Ales, a cottage brewery in Argyllshire, beat off the likes of Cadbury, Guinness and Fairy Liquid to scoop a design industry “Oscar”.

The award is posthumous recognition for former dairy farmer Jonny Delap who set up the firm but died last year before the firm received his remarkable achievement was recognised.

The long-understated brewery was launched in 2001 by former dairy farmer Jonny and his wife Tuggy, to make use of buildings that were going to rack and ruin and to create some much-needed employment in the west of Scotland.

After five years of stuttering sales they had a popular, quality beer but ineffective presentation was holding them back as the labeling on their bottles looked dated and they were losing out to increasingly sophisticated competition which had stronger packaging.

Mr Delap had a heart attack last year and passed away, aged 65, and the business is now run by his son Jamie, 42, and operations director Charlie Craig.

Jamie, from Argyll, said the award is the perfect recognition for his late father, who grew the company from such humble beginnings.

He said: “I think he would be so proud that the project he started 10 years ago is being recognised like this.

“He and my mum did it together, it was really their creation – I’m just happy to be carrying it on.

“My dad’s ambition was to create a thriving business up here in this part of the world and I really feel as though he has achieved that.

“The re-branding project started very much before I was even involved, he started it and saw it through until it was completed in 2005.

“Since then our output has been going like a rocket – it has more than doubled and we’ve started exporting to Sweden and Hong Kong and have had interest from Japan and the states – but we’ve never had to approach anyone, they’ve always come to us.”

He added: “The business started off with its original branding which carried it through for a while, but it needed revamped.

l of the ideas on board and progressed it so much.”

Last night judges decided labeling on the bottles, which are produced in a disused dairy farm building at Loch Fyne, were more commercially effective than brands designed for a host of household names, including Guinness, Cadbury’s Buttons, Fairy Liquid, Benylin medicine and Rocky biscuits.

Good Creative, which also won a gold award for its work on a Scottish Power safety campaign and a bronze award for devising a social media marketing campaign for Buchanan Galleries shopping complex in Glasgow.

Following a redesign of the Fyne Ales packaging, which used bold styling and content to ensure clarity of communication and differentiation from its competition, Fyne experienced a 49 per cent increase in sales – taking its turnover to £822,000 – a 20 per cent rise in net profitability and it outperformed the market by 30 per cent.

The company, which now sells to Waitrose, Oddbins and Wetherspoons, expects this trend to continue, and by 2012 it predicts it will be selling four times its current volume.

To deal with the increase in volumes, the company recently received a grant of £15,000 from Highlands and Islands Enterprise to upgrade equipment.

Mr Craig said the redesign had helped to transform the company from a cottage industry into a nationally recognised brewery.

He said: “The re-brand is the most important thing we have ever done.

“We knew we had a high quality product but what we didn’t have was marketability.

“We asked Good to come up with something that had a modern edge but which didn’t abandon our traditional roots and they did that brilliantly.

“I’m not surprised the work they did has outperformed a lot of the big established brands.

“It’s all about operating effectively in your market and if you do that then you have a chance against anyone.”

Keith Forbes, co-founder of Good, said: “Our re-branding of Fyne Ales’ packaging demonstrates how even a small budget, when spent on good, relevant thinking and design, can generate significant impact.

“It clearly illustrates the value design can add to niche products and brands that are experiencing difficulty, by differentiating them from the competition and creating impact on shelf whilst maintaining their artisan roots.

“It also shows how far-reaching small spending on design can be by opening up new untapped markets, attracting fresh investment and creating new jobs in a declining economy.”

Good is now third in the DBA’s rankings of the UK’s most effective design consultancies and the first agency to win three consecutive gold awards at the event.