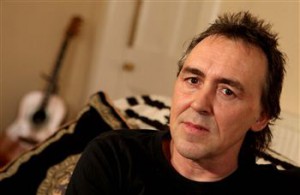 FORMER Bay City Roller Pat McGlynn has hit out at the “soft treatment” of a bus driver he accused of attacking him in the street.

McGlynn, who had suffered a heart attack days before the incident, reported to police that a complete stranger had punched him in the face as he was stopped in his car at traffic lights.

We can reveal that cops eventually tracked down a 45-year-old bus driver, called Paul Gardner.

But McGlynn is outraged that prosecutors decided to give Gardner a “slap on the wrists” rather than drag him into court.

Gardner was given a formal warning by the procurator fiscal for a breach of the peace.

The Lothian Buses worker has been banned him from speaking but his wife insisted he never laid a finger on the former Roller.

Deadline News revealed in October last year that McGlynn claimed he was punched in the face after rolling down his driver’s side window as he sat at lights 200 yards from his home in Liberton, Edinburgh.

McGlynn said the attack was motivated by him being in the 70s tartan-teen-pop band. He said the assailant shouted that members of the Bay City Rollers were “paedophiles and perverts and poofters”.

McGlynn said he had to go to hospital following the incident and said he had a cracked collar bone and two of his teeth had come loose.

Police tracked down the mystery driver seven weeks later and handed a file to the Procurator Fiscal in Edinburgh.

McGlynn said he was told the case would come to court on February 3.

He said: “I couldn’t be there myself – I was at a heart check-up at the hospital.

“The fiscal’s office told me he had been let off with a warning and wouldn’t face a court appearance anymore.

“I just couldn’t believe it, it’s outrageous. It was a completely unprovoked attack and he gets away with it scot-free – it’s absolutely ridiculous.

“I had been told he was pleading guilty so thought he would be punished appropriately.

“It’s a complete waste of the police’s time – they went to the trouble of tracking the guy down and arresting him – and it’s all been for nothing.

“The whole system is wrong if this is what’s going on.”

McGlynn, 52, who played rhythm guitar for the band in 1976, added: “All of us in the band have been taken to court for things we didn’t even do, and this guy gets away with it.

“If it had happened to anyone else and I think it would have been treated differently.”

McGlynn had been rushed to the Royal Infirmary of Edinburgh on 3 October following a heart attack and said he was on his way home from a check-up when the incident happened, at around 12pm on Saturday 23 October.

He said: “It is the curse of the Bay City Rollers.

“This guy must have known he could get let off with it.

“It worries me now because he knows everything about me and probably where I live and everything, and I know barely anything about him.

“Now he’s been in trouble for it he might come after me – you hear the horror stories.”

Gardner’s wife, Lesley, insisted her husband had no idea who Pat McGlynn was at the time of the incident and said it was only an “argument”. 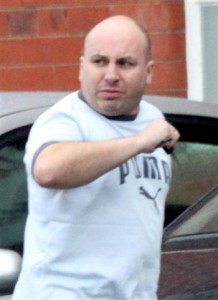 Speaking from the couple’s home in the Gilmerton area of the city, she said: “I want to make it clear that no assault took place, and that my husband had no idea who Mr McGlynn was, so there is no way he was shouting the obscenities suggested.

“I think Mr McGlynn had cut my husband off in the lane he was driving in and some finger gestures followed, as they do.

“They had an argument about it at the traffic lights but no one was assaulted.

“My husband was returning from the vet with his mother’s cat and he was upset that he had to tell her the cat wasn’t going to make it.

“When the police came to speak to us almost seven weeks later on 12 December they didn’t even mention an assault, only a breach of the peace, if Mr McGlynn had reported that to the police then they obviously didn’t believe him.”

“We got the letter saying the Procurator Fiscal thought there was no need for it to go any further. It was classed as a warning – they said that there wasn’t enough evidence to take it any further.

“My husband could end up losing his job over this, and it’s not even true.

A “direct measure” is a controversial way of keeping less serious cases out of court, and the move has been criticised for being “too soft” on offenders.

They can be handed one of four outcomes, including a warning, a fine of up to £300, a compensation order up to £5,000, or a social work diversion.

A Crown Office spokeswoman said: “The Procurator Fiscal at Edinburgh received a report concerning a 45-year-old man in relation to an alleged incident on 23 October 2010.

“After full and careful consideration of all the facts and circumstances of this case, the Procurator Fiscal decided that the case should be dealt with by a direct measure.

“The case is now closed.”