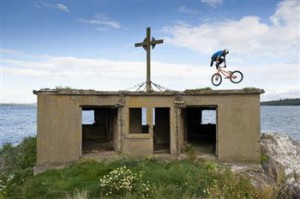 SCOTS stunt bike star Danny MacAskill was left seething after traffic wardens slapped a parking ticket on his van at the premiere of his new movie.

MacAskill’s team claim they had permission to park outside the venue but the message does not seem to have filtered through to Edinburgh’s notorious army of parking enforcers.

The 25-year-old emerged from the show to find a £60 ticket slapped on the windscreen of his camper van.

The vehicle, which was parked at the end of the red carpet, was used by Danny as his temporary home while he filmed MacAskill Conquers.

For the movie, the daredevil from Dunvegan, Skye, spent almost three months on the road filming tricks amid stunning Scottish scenery. 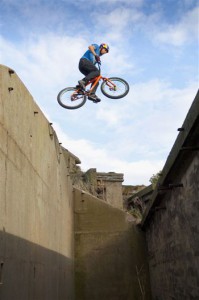 While the film was being shown at the venue in Picardy Place, it was also being projected on to the windscreen of the camper van.

But that did not stop one of the city’s parking attendents, dubbed the Blue Meanies, sticking a ticket on the windscreen – as the movie played.

A spokeswoman for Danny’s marketing firm, Holler, said: “Yes, the van got a ticket.  I don’t know how much it was for I just remember seeing it on the windscreen.”

An insider at Red Bull, Danny’s sponsors, claimed they had special permission to park the van on a double yellow line.

He said: “The parking attendant obviously thought otherwise. We certainly were not expecting it and we were surprised to get one.”

The insider said Red Bull would pay for the fine.

Danny MacAskill shot to fame in April 2009 when he uploaded a film of himself completing a series of astounding bike tricks around Scotland’s capital – including riding up and flipping off a tree.

Since then, MacAskill has been inundated with offers to be filmed in various situations and locations worldwide. 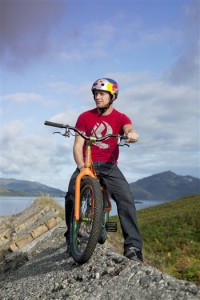 He’s been featured in the New York Times, appeared in a car TV-commercial, has appeared in a Hollywood film as a stuntman and was even nominated for the Action Sportsperson of the Year Category of the Laureus World Sports Awards.

Two years ago a driver received a ticket even though all four of his tyres had been stolen during the night and he was unable to move his car.

The previous year, funeral directors McKenzie and Millar were amazed to discover a £60 ticket as they waited to load a coffin into their vehicle.

Tim Cowen of NSL Ltd said: “The vehicle was parked on double yellow lines without a dispensation.”