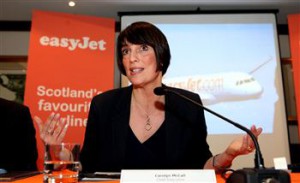 Carolyn McCall said she had watched the show, which parodies ITV’s documentary series, Airline, that followed Easyjet’s operations at Luton Airport, and thinks that it has benefitted the airline.

She said: “It just means that Easyjet are completely on the map so I don’t think it is a negative thing.

The flamboyant manager introduces hilarious schemes such as flying to New York for £1 – but in upright “flat” beds, and the “lovetory” where passengers pay £10 for a couple and £7 for a single to join the mile high club in the cushioned lavatory.

Her comments come as Easyjet announced today (Wed) an expansion of their services, with three new routes flying out of Scotland.

The low-cost airline revealed they will now fly direct to Athens, a first for Scotland, Grenoble and Tenerife in a bid to provide Scottish travellers a larger range of destinations to choose from.

The expansion plans also include a fifth Easyjet aircraft stationed at Edinburgh Airport, which will create over 60 jobs and 300,000 extra seats for passengers.

The announcement comes despite the disruption to airline services during November and December last year due to heavy snowfall.

Ms McCall said: “The whole of December was a challenging month for all airlines.

“For us, we went through 30 consecutive days where one of the airports that we operated at was closed.

“But we managed that very well and we are getting very good at managing disruption, particularly from a passengers point of view.”

Edinburgh Airport’s managing director, Kevin Brown, supported the announcement and said that it was “not only an investment in Edinburgh airport, but in Edinburgh itself”.

He said: “There has got to be a way for airports to recover costs and ultimately we would rather none of these things had to be paid for but we live in a commercial reality.

“The challenge is how airports pay for them [costs]. If that means passengers have got to pay more for their tickets that is something we would not want to see.

“But the airport has been very open with us, about what they were doing, and I think a lot of it is that it is executed well and operates well and that is what’s happened at Edinburgh.”