Firefighters called out to rescue girl who slam dunked herself 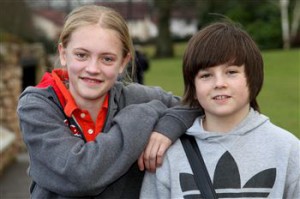 A TEENAGE girl told today how she had to be rescued by firefighters after slam-dunking herself through a basketball hoop.

Ceilidh, from Wallyford, East Lothian, was at the local community centre on Wednesday night when she decided to climb on to the basketball hoop.

She said: “I was with friends at the time. I was standing up on the basketball hoop and my foot slipped.

“I was just hanging from my arms. I was stuck right in it.

“I was a bit scared, I thought I was going to fall. I was just shocked. It was sore on my arms.

“One of my friends phoned the fire brigade. I thought they were going to have to cut me out but they just pulled me out.”

The third year pupil at Musselburgh Grammar School had hoped to keep her slam dunk quiet from dad, James, 40, and mum, Lynn, 43.

She said: “It’s just embarrassing. I never told my mum and dad but I think my gran told them this morning.”

She added: “I was just sitting up there because there was nowhere else to sit. It was easy to get up. I just climbed up the back fence.”

Later in the day, Ceilidh returned to scene, saying she was still feeling some pain from her ordeal.

“My arms are still sore,” she said.

She added: “The firefighters were very helpful. I’m thankful to Darrell for phoning them.”

The teenager was feeling increasingly embarrassed by her brush with fame.

When asked about all of the attention she has been getting Ceilidh said: “It’s quite annoying.” 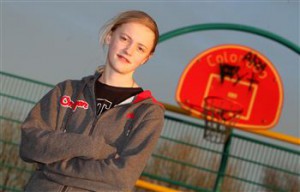 ound at the park and was with around six friends when the accident happened.

He said: “It was the first thing I thought of. They were just like what’s wrong and I was like my mate’s stuck in a basketball net.

“There was three firemen that went up. They said ‘just don’t struggle’.”

Ceilidh was stuck in the hoop for around 15 minutes, according to Lothian and Borders Fire Brigade.

Firefighters confirmed they used ladders to reach the girl and freed her by pulling her clothes through the hoop.

The spokeswoman added: “A 14-year-old girl got stuck halfway through a basketball hoop because of her clothes.

“A short-extension ladder was used and she was freed by moving her clothes to allow her to pass through the hoop.

“She never had any injuries except her pride.”

Delivery driver runs into burning house to save man’s life

Fallen firefighter was filling in for pal