Susan Boyle to give up sweets and chocolate for Lent 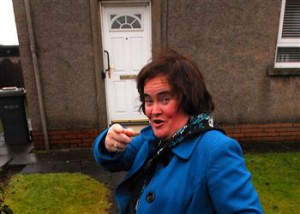 SWEET toothed Susan Boyle has revealed she is giving up sweets and chocolate for Lent this year.

The Scots singing sensation told the Scottish Catholic International Aid Fund (SCIAF) that she would be giving up all confectionery for 40 days and 40 nights.

She has also backed the SCIAF’s appeal ahead of Lent this year, which begins next Wednesday.

The 49-year-old songstress is to launch the ‘Wee Box, Big Change’ appeal in Glasgow on Ash Wednesday as a part of the Lent campaign.

The singer has joined Cardinal Keith O’Brien, Scotland’s most senior Catholic, who has urged Scots to support the campaign, which will focus on emergency aid and long term development work that the SCIAF is providing to desperately poor people in developing countries such as Haiti and Sudan.

Susan sang for the congregation gathered at Bellahouston Park ahead of the Papal Mass last September.

The ‘Wee Box, Big Change’ appeal is expected to receive support from more famous faces to be announced at the launch event.

Those taking part are pledging to give up their favourite treats during Lent such as coffee, cakes, wine or chocolate, putting the money they save in a SCIAF Wee Box, with the proceeds being donated to the charity at Easter.

Val Morgan, spokesman for SCIAF, said: “Susan Boyle has known about us since she was a young girl.

“She’s giving up all sweets and chocolate for Lent this year.”

The appeal raised £889,875 in 2010 and was supported by The Proclaimers, footballing legend Ally McCoist and Ultimo bra boss Michelle Mone.

Cardinal O’Brian said: “I would encourage parishes, schools and the general public across Scotland to enter into the spirit of sacrifice during Lent by giving up a favourite treat and putting the money you save in a Wee Box, so that SCIAF can help more people in need to have a better life.”

Study finds that Chocolate is egg-cellent for the birds