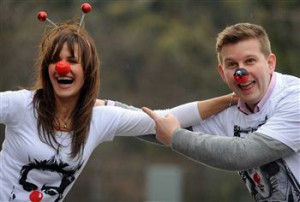 FARTING in public has been revealed as the main thing that gives Scots a red face.

According to the first ever Comic Relief ‘Big Red Face Report’ published today (Thursday 3rd March) around 38% of Scots have admitted that passing wind in a public place is the thing that most causes them to blush.

Other embarrassing moments include:

And the remaining 2% of those surveyed also revealed the thing that is most likely to give them a red face. The incidents were:

But despite suffering many embarrassing moments Scots, have been revealed as the people least likely to get embarrassed with people admitting to getting a red face an average 1.1 times per week.

This is lower than the national average of 2.2, with an important meeting at work and crowded public areas tied as the two top places that Scots have experienced an embarrassing moment.

And Celebs haven’t been saved their blushes with Judy Finnegan’s wardrobe malfunction when she flashed her bra at the National Television Awards voted third on the list of funniest celebrity embarrassing moments.

Her blush-worthy boob was topped only by a classic Blue Peter moment when Lulu the Elephant pooed on the floor before trampling presenter John Noakes’ foot, and Emu’s attack on Michael Parkinson which was voted the funniest celebrity blunder.

Some of Britain’s favourite personalities including comedians Miranda Hart and Ronni Ancona have joined the 70 per cent of the public who admit to an embarrassing moment and revealed the incidents that make their famous cheeks flame.

Miranda Hart said: “Sadly, I’ve had a number of embarrassing moments. But I shall tell you this one.

“I went to a toilet on a train and I thought I had locked the door. I was just taking my trousers down, and as I did that the train did one of those ‘lurch’ stops.

“I fell through the door of the toilet which hadn’t been locked, and was trouserless and pantless in front of a buffet queue in the train carriage.”

Red Nose Day is on Friday 18th March people are being urged to face their fear of embarrassment, don a Red Nose and do something funny for money.