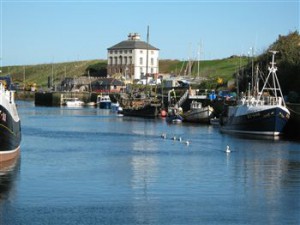 THE father of a Scots supermodel is offering a £6,000 reward for the capture of criminals he claims “sabotaged” his fishing boat.

Michael Fairnie, 49, reckons his trawler was knocked out after a mixture of sand and glue was poured into the engine.

Police have confirmed they are investigating the incident, which left the Nova Spero and its crew drifting dangerously close to rocks at Eyemouth Harbour, Berwickshire.

Mr Fairnie’s daughter, the model Savannah, was at the centre of a legal dispute last month when it emerged she was being sued for tens of thousands of pounds by her former lover, Hearts midfielder Rudi Skacel.

Mr Fairnie, 49, from Wallyford, East Lothian, is skipper of the Eyemouth-based Novo Spero, which broke down just 200 metres from the harbour on February 21.

His brother and business partner, Jamie, said: “Someone put sand and mastic in the oil filler so they would have to have a working knowledge of boats.

The 47-year-old from Musselburgh, East Lothian, added: “This was attempted manslaughter. The harbour is very dangerous because of the rocks.

“If the engine had stopped 10 seconds later we could have lost the crew and a £1 million boat.

“I can’t believe this has happened.  I don’t know why someone would do this. I think someone might be jealous or something but I really don’t know. It’s just disgusting.”

Mr Fairnie  claimed that this was not the first time that the family’s boats had been sabotaged.

He said another vessel was deliberately damaged 10-years-ago when pins were put in the boat’s gear box.

Mr Fairnie  had to tow his brother’s trawler to Fraserburgh, Aberdeenshire, after the accident and Michael Firnie has gone on holiday to recover from the stress of the dramatic experience.

Previous generations of the family have been in the fishing industry for 300 years and the pair have based their boats in Eyemouth for 30 years.

A spokesman for Lothian and Borders Police said: “We are investigating following reports of malicious damage to a fishing boat in Eyemouth.

Enquiries are ongoing and anyone with information that can assist with this investigation is asked to come forward to police.

Last month it emerged the skipper’s 25-year-old daughter, model Savannah Fairnie, was involved in a legal battle after being accused by her Skacel, of owing him £43,000.

Skacel had reportedly “arrested” the model’s bank account and her attempts to appeal against it were quashed in court.

The Czech star claims she took £62,019.05 without his consent following their marriage break down in September 2009.

His solicitor Niall Hassard told Edinburgh Sheriff Court that Savannah paid back more than £19,000 – but they are suing for the remaining £42,969.05.

But Savannah – who has moved back in with parents – insists Skacel knew she’d spent the cash from their joint account.