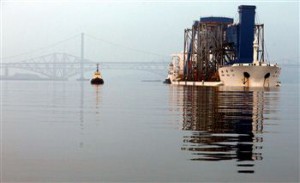 The “Goliath” crane passed under the Forth bridges and dropped anchor west of the Rosyth Dockyard in Fife where it will berth tomorrow (Fri).

At a height of 68 metres, the crane is taller than the Wallace Monument and will play a vital role in the assembly of the Royal Navy’s Queen Elizabeth Class aircraft carriers at the Babcock Dockyard.

“After watching the Goliath crane being fabricated, it was fantastic to see it coming under the Forth bridges and I look forward to welcoming it to its new home in Rosyth.

“The Goliath crane is an essential element in Babcock’s commitment to completing the assembly of the HMS Queen Elizabeth and the HMS Prince of Wales.”

The crane cost around $20 million to construct and has a span of 120 metres to cover the construction area of the aircraft carriers.

It has the capacity to lift 1,000 tonnes and has been two years in construction by Shanghai Zhenhua Port Machinery (ZPMC).

“The crane is a vital element in the programme to build both the QE Class aircraft carriers because the ships are being constructed in such huge sections, so we needed something capable of lifting up to 1,000 tonnes.

“It will be great to see the crane in action as blocks of the ship start to arrive in Rosyth in the months to come and HMS Queen Elizabeth starts to take shape.”

The crane is being delivered partially-erected, with the girder and upper sections of the legs already assembled.

When it arrives at Rosyth it will be erected to its full height on the ship deck over a six week period, before being winched from ship to shore directly onto the crane rails.

It will take just over four months to erect, test and commission the crane, for final handover in the summer of 2011, ensuring that the crane will be ready for its operational availability target of September 2011.