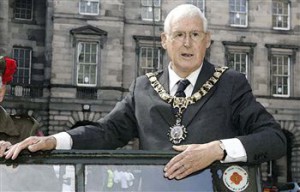 COUNCIL bosses are set to shell out a whopping £30,000 on one painting and a stained glass window depicting previous Lord Provosts.

The City of Edinburgh Council, which is to make millions of pounds worth of cuts including the loss of 1200 jobs, has commissioned two pieces of art priced at £15,000 each.

Lord Provost George Grubb is to be honoured on canvas while his predecessor, Lesley Hinds is expected to appear in stained glass.

Labour’s Councillor Hinds’ stained glass is to show her image as well as key moments during her time in office from 2003 to 2007 including the Make Poverty History March and creating the Edinburgh Award.

The finished piece will be on display next to the Lord Provost’s office in city chambers in a space 81 centimetres wide and one metre high.  An artist has yet to be appointed but work is due to start within weeks.

The Council are also seeking an artist to paint Cllr Grubb with some haste as he is understood to want to be painted while he is still in office.

News of these portraits and their cost comes just weeks after it was announced that there will be £32 million of cuts made across council departments.  But Cllr Hinds defended the art.

She said: “When I was first asked about this I asked what are the resources needed and are the resources there?  I was told that money was set aside for this.  I do not want to be seen to be spending lots of money when we have been looking at cuts but this has been discussed for the last four years now.  I did not expect it to take four years and I am not happy about the delay.  I want to ensure costs are kept to a minimum.”

Councillors are due to be asked to approve the spending on the stained glass as well as the commissioning of Cllr Grubb’s portrait at a meeting on Thursday.

The City Chambers holds a collection of paintings and portrait busts of previous Lord Provosts that dates back to the 17th century and the tradition to commission portraits started back in the 19th century.

Council leader Jenny Dawe said: “The Lord Provost Fund was established to continue the tradition of commissioning portraiture to commemorate those who have held this high-profile civic role.”