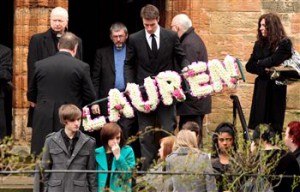 FRIENDS of a teenager who was killed after being kicked in the head by her horse turned out at her funeral wearing jodhpurs and full riding gear as they said goodbye to a “lovely, young girl”.

Lauren Bryant, 16, suffered massive head injuries after her horse, Solo, lashed out as she prepared to go for a ride Duddingston Farm stables in Newton, West Lothian.

This morning (Fri) emotional mourners paid tribute to the popular teenager as they appeared in their droves at St Michael’s Parish Church in Linlithgow.

Family, friends, teachers and classmates from Linlithgow Academy stood side by side to say goodbye to the young girl and to celebrate her life.

Floral tributes were laid outside the church many in the shape of stars. One tribute was left with a sash reading “B.F” from one of Lauren’s best friends.

A large floral tribute reading “niece” said: “May you ride through the gates of heaven with your head held high. You have certainly earnt your place there.”

Lauren’s aunt Lousie Tait, 29, who runs the stables, also wore full riding gear as a mark of respect for her young niece.

Friends wearing school uniforms and riding gear clung onto each other as they emotionally said goodbye.

Minister Dr Stewart Gillen and Rev John Paton led the ceremony singing hymns “Morning has Broken” and “Make Me a Channel of Your Peace”.

Rev Paton said: “We gather her to remember a beautiful young person.”

He spoke of a magnet that was given to him by Lauren’s mum which “amazingly” described the teenager perfectly.

The writing was printed on the front of the order of service for all to read.

It said: “A sensitive individual who is usually quiet in nature but possesses an underlying strength of purpose”.

Rev Paton added: “The truth is she was a lovely young girl, a credit to herself and her family.”

He said: “Just last Sunday Lauren was out with Solo, a horse that she loved and who doted on her.

“Some freak accident occurred and this lovely relationship between a young girl and her horse ended in tragedy.

“How can that be? How can you explain that? It doesn’t make sense.”

But Rev Paton said that now was to time to “celebrate a beautiful life”.

Lauren’s love of horses began when she was just eight-years-old and it was her dream when she left school to pursue a career in the equestrian field.

She was described as a quiet girl who knew what she wanted.

Rev Paton said that her parents were extremely proud of her, “and rightly so, she never caused any upset.”

And her grandparents said they “simply loved their big braw lassie.”

Lauren’s family have said that Solo would not be destroyed but will be looked after by her aunt Louise Tait.

Lauren’s coffin was taken to be buried at Kingscavil Cemetery and friends and family were invited to a wake at The Rose Club in Linlithgow.