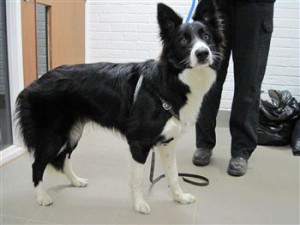 A COLLIE has been taken into care by the Scottish SPCA after it was found neglected and tied to a fence.

The Scottish SPCA has appealed for information that may reveal more about why the one year old animal was left at the side of a main road between Larbert and Denny, Stirlingshire.

A member of the public stumbled upon the male collie on Sunday night, February 27 on the walkway next to the A883 road.

The dog has been named Denny by the staff looking after him in the Edinburgh and Lothians Animal Rescue and Rehoming Centre in Balerno.

Scottish SPCA Inspector Louise Seddon said, “The dog was absolutely terrified and barking frantically when I arrived to collect him.

“Once he had been untied he calmed down a little but he was obviously very confused as to why he had been left there.

“Although he is in good bodily condition he is a very nervous dog.

“He is black and white, approximately one year old and was wearing a grey fabric harness with studs.

“Whoever abandoned him obviously didn’t care about his welfare as they couldn’t have been sure that someone would see him there as it was dark.

“We are keen to find who owned him and would urge anyone with information to contact us.”