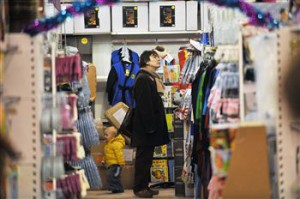 SCOTS mums are getting a surprise at the till as children’s clothes are being sneakily hiked up in price depending on sizes.

The UK’s biggest retailers are operating a price-loaded policy for kids’ clothes that does not apply to adults.

And the policy has sparked fury among mums and grans across the country who have hit out at the price discrimination for kids.

A spokeswoman for the UK-wide mums forum Mumsnet said: “Many high street chain stores are guilty of loading price increases onto children’s clothes which they avoid doing to adult ones.

“Any argument that the rise is justified by bigger sizing doesn’t make sense because stores charge the same prices for a woman’s size six sweater as they do for a size 20.

“The increase, which often starts at a jump of £2, seems to be incomparable to the difference in the amount of material used.

“Our mums have also noticed that the smaller clothes are at the front of the rails so you see the cheaper price.

“Then when they take two – one for an older child – they’re given a shock at the till! All we ask for is fairness.”

But new European legislation is set to forbid any discrimination based on age.

The news comes after the European Court of Justice decision which forbids car insurance companies discriminating in favour of women.

The National Children’s Wear Association has said that they are raising the issue of unfair prices with its members.

Elizabeth Fox, executive director of the association, said: “It’s an important issue and needs to be addressed with retailers.

“The price increase is obviously not a VAT one.”

Richard Dodd, a spokesman for the British Retail Consortium, said: “The difference between small and large in children’s clothes is more significant than it is in adults.

“We have to take into account styles and design.”