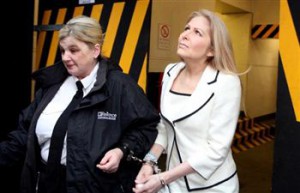 The 47-year-old admitted culpable homicide on the grounds of diminished responsibility.

Twins Austin and Gianluca, eight, and their sister Cecilia, five, died at their flat in Slateford Road last August. The court heard each of the children had been stabbed eight times.

Riggi was involved in a custody battle with the children’s father, Pasquale Riggi, and had moved from Aberdeenshire to Edinburgh with her children following the break-up of their relationship.

The couple are said to have had a telephone call two days before the tragedy, in which Mr Riggi said he had been left with no choice but to take the children away.

The High Court in Edinburgh heard that the bodies of the children were found following an explosion in the second-floor flat.

Riggi, who is originally from California, deliberately jumped head-first from the balcony of the second-floor flat but survived.

She could be heard sobbing in court as the evidence and reports were read out.

Following the case, Pasquale Riggi stood solemn-faced outside the court while a statement was read on his behalf.

It asked for his and his family’s privacy to be respected at this time and also spoke of his loss.

In the statement, read by David Sinclair, of Victim Support Scotland, Mr Riggi said: “The loss of my three beautiful children has been an overwhelming tragedy.

“Nothing can be said at this or any other time that can mitigate what has happened.

“I and my extended family loved Austin, Luke and Cecilia dearly and they live in our minds and our hearts forever.

“I do not know what lies ahead but wherever life takes me, my friends and family it will be with the memory of a dreadful loss and with gratitude for all the good times spent with Austin, Luke and Cecilia.

“My family and I would like to thank all those who have provided and continue to provide support.

“My intention now is to seek to move on which will not be an easy task.”

Pasquale Riggi later left court through a side door, accompanied by members of his family.

Ashen-faced, he made no further comment before getting in to a black cab.

Lothian and Borders Police issued a statement from Detective Superintendent Allan Jones, who said: “The thoughts of everyone involved in this case are with the children’s father, Mr Riggi, and their family and friends today.

“The investigation into the death of twin boys, Luke and Austin, and their sister Cecilia, was both harrowing and traumatic from the outset.

“I would like to commend those who worked on this inquiry for their professionalism in the midst of such tragedy.”

Riggi will be sentenced next month.