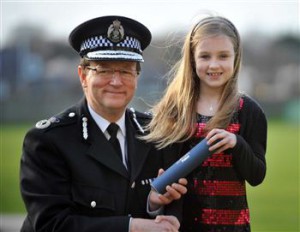 A NINE-YEAR-OLD girl who saved her mum’s life told how “nervous” she was as she walked on stage to collect a bravery award.

Leah Grant, from Linlithgow, West Lothian, came to her mum’s aid as she suffered an epileptic fit in November 2009.

The quick-thinking youngster, who was only seven at the time, checked her mum’s pulse and made sure she was still breathing before dialing 999.

When the paramedics arrived, Leah provided them with helpful information, which allowed the crew to treat her mother – Grace – in the best way possible.

Leah received a Meritorious Award today (Wed) from Lothian and Borders Police for her bravery.

She was handed the award by Chief Constable David Strang, the head of the force.

When asked about how she felt about getting the award she replied “nervous”.

She said she has become a bit of a celebrity because of it.

She said: “A man just asked me for my autograph and someone in school asked me too.” 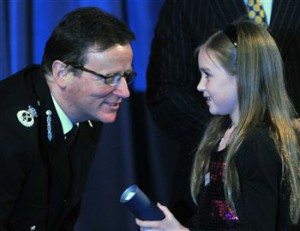 to her Christmas Party.

The youngster said that the night before her mum had the epileptic fit she had been told what she should do in an emergency.

But she added: “I wasn’t paying much attention.”

At the ceremony a police spokeswoman said: “At just seven-years-old, Leah’s swift and calm response meant emergency services were able to treat her mum immediately.

“Everyone involved was impressed with Leah’s caring, thoughtful and polite manner, and we are delighted to honour her today.”

He had served as a dog handler with Lothian and Borders Police for 22 years and also received a long service and good conduct medal at the ceremony.

His family collected the awards in private.