Scotland to have a Royal Wedding of its own

THE Queen’s eldest granddaughter has announced she will wed in Edinburgh this summer.

Zara Phillips, 29, and her fiancé 32-year-old England rugby captain Mike Tinall will tie the knot at Canongate Kirk on the Royal Mile on Saturday July 30.

The venue had been widely rumoured after the pair announced their engagement in January, after another couple changed their own wedd 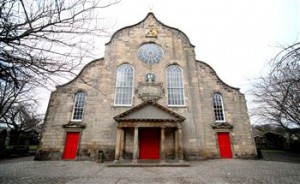 Buckingham Palace revealed the details of the nuptials today (Wed), which will be the second Royal Wedding this year following on from the nuptials of Prince William and Kate Middleton on April 29

The pair were introduced by Miss Phillips’ cousin Prince Harry in a bar in Sydney during the 2003 Rugby World Cup.

Mr Tindall proposed just before Christmas at the couple’s Cheltenham home in Gloucestershire.

Miss Phillips is one of Britain’s top equestrians and a former world three-day eventing champion.

Her husband-to-be plays for club side Gloucester, and has been capped more than 60 times by his country.