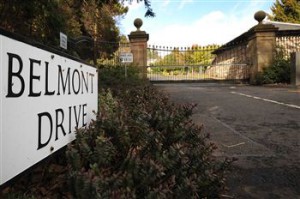 FORMER Rangers boss Sir David Murray has emerged as a homeowner in Scotland’s most exclusive street.

The millionaire businessman has a property in Edinburgh’s Belmont Drive, where the average house price has been revealed as £2,346,000.

According to a survey by Bank of Scotland, that makes the private street in Murrayfield the most expensive place to live anywhere the country.

Belmont Drive is protected by a heavy gate and screened from prying eyes by trees.

An intercom system complete with a camera sits to one side with Murray’s name among the other residents, none of whom responded to calls today (Wed).

Other residents are understood to include a high-flying banker and an executive from a leading software company.

The only sign of life was when a Mercedes glided through the gates and turned into Ellersly Road.

One neighbour, who asked not to be named, said Sir David had bought part of old Belmont House and was currently having work done on it.

“A former Lord Provost used to stay at the house,” said the neighbour.  “But it has now been split into three or four properties and there are other properties that surround them.”

Local shopkeepers confirm the area is dripping with money.

Natalie Wilkes, 29, owner of Rococo Beauty in Ellersly Road, said: “It’s a very affluent area. In the summer you see a lot of people with open top Ferraris and Porsches.”

An employee at the Cocobean Cafe next door said that he had done catering for homes at Belmont Drive.

He said: “The houses are massive. They are mansions.”

The east wing of Belmont House sold three years ago for £2.15m.  The mansion was bought by a developer in 2001 and converted in to east and west wings and a penthouse.

As well as privacy afforded by the gate and trees, the street  is next door to Murrayfield golf course.”

Second place in the survey went to Ettrick Road, which an average house price of almost £1.9m.

The street is in the EH10 postcode, whose other residents include JK Rowling, Ian Rankin and Alexander McCall Smith.

The survey carried out by the Bank of Scotland, also revealed that there are an estimated 14 streets in Scotland with an average house price above £1 million.

Whilst Countess Gate in the suburb of Bothwell is Glasgow’s most expensive street, the next two are both located west of the city in Hyndland; Kingsborough Gardens (£949,000) and Westbourne Gardens (£895,000).

Nitesh Patel, housing economist at Bank of Scotland, said: “As the political and financial capital of Scotland, unsurprisingly the most expensive residential streets can be found in Edinburgh.

“Across Scotland, the survey shows that the most expensive streets are tightly clustered in relatively small areas.”