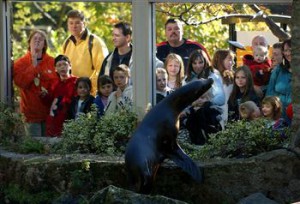 SEA LIONS may become a thing of the past at Edinburgh Zoo as the two current residents could be given their marching orders after it was revealed their pen requires an expensive upgrade.

Sofus and Miranda, who are the first attraction visitors see when they walk into the zoo, may be moved on to a new home as bosses fear they can not cope with the estimated £2 million bill to make their environment suitable.

The zoo has been ordered to upgrade the enclosure in a report that threatened to remove its operating license.

Darren McGarry, animal collections manager, said: “It would be a big cost because we’d have to change the whole pool and filter system.

“It is up for discussion.

“Sea lions need to be kept in the right conditions and if we don’t have the money to do the improvements, they’ll need to go.

“If we can’t afford them we have to think of the animals first.”

As the zoo gears up for the arrival of two Giant Pandas from China, it zoo also revealed plans for a multi-million-pound veterinary centre had to be put on hold.

Edinburgh Zoo’s financial ties are believed to be a result of them being unable to sell surplus land which was originally worth £15-18 million.

A former member of staff said: “The sea lion enclosure is the first thing you see when you go through the zoo entrance.

“It’s really popular and has been there since it originally opened.

“The costs to keep them may be high, but you have to wonder why they can’t invest money in the sea lions when we’re spending several million on bringing two pandas across from China.”

The report, issued by the Scottish Government, said the enclosure was out of date and the sea lion pair were said to be contracting eye infections, as well as their food store being infested with vermin.

James Stewart, director of resources at Royal Zoological Society of Scotland, said: “Following the zoo’s inspection in 2006, there were a couple of points raised by inspectors that we were advised should be addressed before Edinburgh Zoo’s license was due to come up for renewal.

“We continue, as always, to treat any eye problems in our sea lions and the animals continue to receive regular vet inspections and treatment if required.

“Originally we had planned updates to our vet hospital but our ability to progress with this in the original timescale was compromised by local planning issues as well as the dip in property prices.”