NEW footage of a Scots sheriff performing on Top of the Pops has been revealed in an original recording of the show.

The videotape, recently unearthed from the BBC’s archives, presents the highly-respected and very sober judge in a sensationally different light. 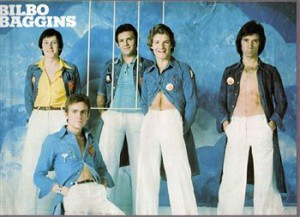 Archivists have been uploading classic performances from the 60s and 70s to their Youtube broadcasting site, but unfortunately for Sheriff Gordon Liddle, this includes a clip of his denim-clad pop band Bilbo Baggins.

The sheriff, who sits on the bench at Edinburgh Sheriff Court, is the only known member of the Scottish judiciary to have appeared on the chart music programme.

He spent the majority of the 70s rocking in the five-piece band, which was branded a spin-off of tartan teen sensations the Bay City Rollers.

But now, the 59-year-old takes on a more serious role, dealing with criminals at one of Scotland’s busiest sheriff courts.

Sheriff Liddle has previously criticised proposals by the Scottish Government to do away with custodial sentences of less than six months.

While sitting at Edinburgh Sheriff Court in 2009 he said short sentences served a useful purpose because offenders were afraid of going to jail.

In January he used his experience as a musician while sentencing a guitarist who had been caught drunk-driving.

Aaron Lawson, 39, claimed he could not work if his license was revoked, but replying to his defence solicitor, the sheriff said: “But surely he can lug a guitar around with him?”, and banned him from driving for three years.

And in 2008, his former manager Tam Paton almost came face to face with the sheriff who used to drum in his band.

Paton was in court over suspected drug dealing charges, but eagle-eyed court staff made sure he was taken off Sheriff Liddle’s list and passed on to another judge.

And in 2009, Sheriff Liddle was said to be “absolutely furious” when a prisoner he was sentencing escaped from the dock in a bid for freedom.

Brian Lamb vaulted from the dock and fled the court room when he heard he was to be locked up.

He made it within yards of Edinburgh Sheriff Court’s front door before three security guards grabbed him and reined him in.

The long-lost clip of Bilbo Baggins playing their hit “She’s Gonna Win” was added to the site in December. 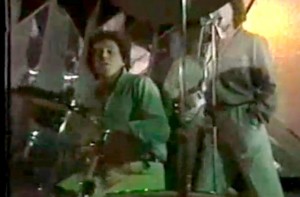 It shows “Fid” – a nickname derived from his surname – whacking the drums and grinning wildly in front of adoring teen fans.

The emergence of the footage has delighted devoted fans of the band and fellow musicians.

But it is a moment Sheriff Liddle probably wishes was still gathering dust in a basement of the BBC.

One prominent Scottish solicitor, Peter Farrell, said he remembered the band but did not realise it had featured a future judge on drums.

He said: “I’m sure he will be quite embarrassed but I really do not wish to comment any further.”

Unusually for a judge, Sheriff Liddle left school in Glasgow without any qualifications and trained as an electrician.

He was asked to join Bilbo Baggins by Tam Paton, the manager of the Bay City Rollers. Paton famously dressed the Rollers in tartan but picked a denim look for Bilbo.

The Top of the Pops appearance was the band’s high point but the song only reached 42 in the charts and they split in 1979.

“Fid” gave up keeping time with a band, went to university, and eventually became Sheriff Liddle, handing down time to criminals at Edinburgh Sheriff Court.

McGlynn, who still uses the sheriff’s school nickname, said: “Fid was a really good drummer. He was a brilliant musician when I knew him.

“Fid was an absolutely top guy. We lost touch, but I heard he had gone on to study law and knew he was a sheriff now.

“They were a totally rocking band, I can’t believe they didn’t do better. I remember when they were on Top of the Pops, their performance was great.

Mr McGlynn added: “If I’m being honest, Bilbo was certainly better than the Bay City Rollers. They could actually play their instruments for a start.”

In the Top of the Pops clip, Bilbo Baggins are shown to be wearing high-waisted cream flares and loose fitting denim shirts which were considered high fashion in the early 1970s.

Fashion expert John Davidson said Sheriff Liddle’s look in the video, far from being embarrassing, was now back in style.

“The early 1970s is the universal theme for this year’s season from the catwalk to the high street,” he said.

“This season we see a return to the more casual and down beat fashion that was around in the early 1970s.  High waist flares and casual denim would be an example.”

Members of the Bilbo Baggins fan club were also delighted by the emergence of the clip.

Ritchie Finney, who co-runs the fan site, said: “For Gordon to transform himself from a professional drummer into a sheriff is quite amazing and must have taken years of study and dedication.”

But the video has caused a shudder of embarrassment within the tight-knit Scottish legal community. One normally outspoken lawyer said: “I am not going to comment on the past of a sheriff.”