IT would appear that one prince is just not enough for bride-to-be Kate Middleton. 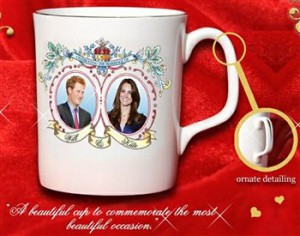 ade a royal mug out of the occasion by advertising a cup with the wrong prince on it.

Miss Middleton is printed on the “limited edition heirloom” smiling away in her infamous blue engagement dress – right next to Will’s brother Prince Harry.

The limited edition souvenir by Guandong Enterprises Ltd is to commemorate the “fairytale romantic union of all the centuries” and retails at £9.99 plus postage.

It is not clear whether the blunder is a witty joke or a right royal mistake.

On the website, the mug is advertised as “the finest bone china” featuring an exquisite design of the “happy couple”.

Baffled Clarence House representatives were left scratching their heads as to whether the cup was a spoof or a mistake.

A spokeswoman for the Prince William said they were aware of the website but would not be commenting.

When asked about whether the mug was a deliberate mistake, a company director said in an email: “Thank you for your esteemed interest. The cups are printed exactly as on the web screen and will stay as that. Many people are delighted in buying for gifts and family occasions and novelty.”

The company, which is registered in the UK, states on its site that the cups are not approved by Prince William, Miss Middleton or any other member of the Royal Family.