The items triggered an evacuation of the terminal building, road closures, and delays to some flights.

The incident, almost four years after Glasgow Airport was attacked, demonstrates how seriously the threat to airports continues to be taken.

A police spokesman confirmed that computer components inside the passenger’s luggage had triggered the alarm.

He said the passenger was still being interviewed by police as mid-afternoon today but no arrests had been made. 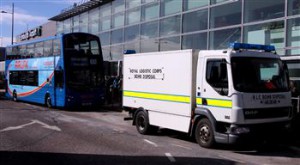 Lynda Macey, 43, a district nurse from Stonehaven was among those caught up in the evacuation.

Lynda, who was heading for a flight to Galway for a charity function , said: “No-one told us what was happening. I called our airline and they had no idea about anything either.”

Magnus Molin, 17, was in Edinburgh with his school has part of a study tour and was heading for a flight back to Copenhagen with his classmates when the alarm went off.

He said: “I was standing over my bag at check-in and the alarm started going off and a man came on the speaker and said there was a fire and we had to get out.

“We were outside for about 40 minutes and no-one was panicking or anything. It was all very routine.” 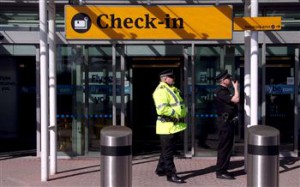 Angela Olson, 32, from America was coming off a plane from Germany when she was quickly evacuated from the airport. She said: “We arrived off our flight and the alarms were going off.

“We didn’t have any bags so we were just told to go right out but people with their bags were still in there. We don’t know what was happening.”

A spokesman from Edinburgh Airport confirmed that the item was found in hand luggage. He added: “At 11.30 this morning we identified a suspect package. We evacuated the terminal and cordoned off the area.

“We were then able to investigate the package and make sure it was safe. Once we did that we were able to reopen the terminal and let the passengers back in.”