A SCHOOL’S fundraising banner has been ordered to be removed for “fanciful” road safety rules.

St John’s primary school in Edinburgh was told to take down a banner promoting school equipment vouchers by council planning chiefs who said the banner would be distracting to drivers.

Fuming parents are fighting against the ruling made by the council, who are thought to have investigated the banner following a complaint.

A letter from a planning enforcement officer was received by the school demanding the banner’s removal because it created a “dangerous distraction to drivers’ attention”.

The banner is encouraging people to donate Sainsbury’s Active Kids scheme vouchers to the school so it can purchase new sports equipment. 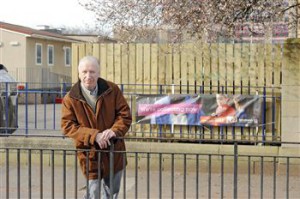 He said: “Every school in Edinburgh is completely underfunded so parent councils have been using every means possible to try to raise money to plug the gaps in the school budgets.

“The thought of anyone driving round the corner and seeing this banner and swerving and killing a child is just fanciful.”

He added that if the school decides to not remove the banner they would be subject to some sort of an enforcement process which would take on a legal status and lead to the council prosecuting itself.