Headless swan could have been killed by love rival 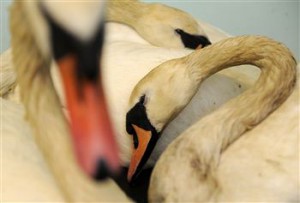 A SWAN that was found decapitated in a park may have been killed by a love rival.

Police were called by a local resident in Stenhousemuir, Falkirk, who found the swan’s body – but it is still unclear if the animal’s head was ever recovered.

A spokeswoman for Central Scotland Police said the incident was not being treated as a criminal act.

Officers removed the swan’s body from the park, behind Larbert Library, but were unable to confirm if the swan’s head was also collected.

Experts say that when the mating season begins, the birds often become violently protective as they pair up monogamously.

A spokesperson for the Royal Society for the Protection of Birds Scotland said: “Swans are very territorial and at this time of year as they are getting ready to pair up and mate.

“It could have been another swan that attacked it as they are known to be vicious.

“Swans don’t really have a lot of natural predators so it is unusual.

“It is quite rare for one to be found decapitated but it depends on if it was killed by decapitation or if it was scavenged after it died.”

The Scottish SPCA was alerted to the incident but did not attend the scene.

Swans are one of the largest flying birds and form mating bonds that last for years.

A swan that survived being shot with an airgun recently found love in Somerset.

The female swan was the only survivour after a group of eight swans were shot in the head and killed last month and has since become “inseparable” with a male swan at a lake in secret location.

Swans are protected under Wildlife and Countryside Act 1981 which makes it an offence to intentionally kill or injure any wild bird or their eggs.

The official website of the British Monarchy states that today, the Crown retains the right to ownership of all unmarked mute swans in open water, but The Queen only exercises her ownership on certain stretches of the Thames and its surrounding tributaries.

This ownership is shared with the Vintners’ and Dyers’ livery companies, who were granted rights of ownership by the Crown in the fifteenth century.

It also says that “nowadays, of course, the swans are no longer eaten”.

This did not appear to stop the Queen’s music composer, Sir Peter Maxwell Davies, who was cautioned by the police in 2005 after the remains of swan were found at his house in Orkney.

He said at the time that the bird died after hitting power lines but offered the police officers who cautioned him, a swan terrine he had made.