Mr Dewar invited Al Najjii, who was also hit by the same car as Olivia, to play an instrumental version of Led Zeppelin’s Stairway to Heaven.

The congregation then heard from two of Olivia’s friends, whom she had known for most of her life, Chloe and Julie.

One said: “The thing I think most people will remember about Olivia was her free spirit, kind heart and massive hair.

“I am sure that you will all agree that Olivia was a very strong girl and I’m so proud of how she fought in hospital and stayed with us for so long. 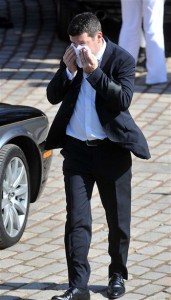 “She was such an amazing person.

“And even though she is not here with us in flesh she will be in our hearts forever.”

The other girl said: “She had a ridiculous taste in music and a wonderful sense of humour which made her get along with everyone.”

As her voice broke, she added: “Her laughter was so loud and I will miss her so much.”

Photos of Olivia flashed on a screen at the front of the chapel as the congregation fell silent to listen to Many of Horror, by Scots band Biffy Clyro.

Mr Dewar directed the whole ceremony without the aid of a minister and one mourner whispered: “I just don’t know how he’s doing this.”

He thanked everyone for all their thoughts and help during the past few months and for supporting them when they brought Olivia back to Edinburgh, a time he said was “very trying”.

Mr Dewar gave a special thanks to Al Najjii, who he called an “outstanding person who I hope will be a friend of the family forever”.

He said: “Olivia had a fantastic imagination and understanding about the world.

“Compliance, dutifulness and resilience are all words that could have defined her.

“She had strong values and even from a very young age she used logic to choose between right and wrong.”

He told how he enjoyed going to gigs with both his daughters at the Glasgow Barrowland and said his fears for Olivia at these concerts were quashed when he watched her dive head first into a moshpit full of middle aged rockers.

Mr Dewar broke down in tears as he said his “personal goodbye” to his young daughter, which he said was “always good times and smiles.”

The congregation left the chapel to Adele’s song Make Me Feel My Love.

Mr Dewar said he had refrained from choosing a song by Pendulum – Olivia’s favourite band – to “save her already deaf granddad from the drum and bass”.

The family had moved to the Middle East when Mr Dewar took up his post as chief executive of Bahrain Airport.

Collections boxes at the chapel door were collecting for Headway, a charity set up to support those with brain injury.