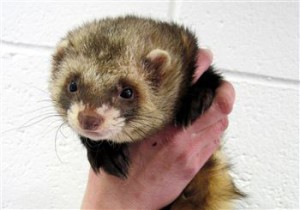 AN adventurous ferret from Edinburgh who managed to fool rail staff into believing he had made a 300-mile-trip from London to the Scottish capital has been reunited with his owner.

The ferret, nicknamed ‘Mickey’ by Scottish SPCA staff, was spotted by workers on a platform at the city’s Haymarket station on Monday evening, moments after a train travelling from London departed.

Rescuers were baffled by the sight of ‘Mickey’ and it was suspected he had hopped off the train from London.

But it turns out the ferret had escaped from his house in Stenhouse, Edinburgh, which is just over two miles away, on Sunday.

A spokeswoman for the SSPCA said: “A friend of the owner called him to say they had seen his ferret on the news.

”The owner came and collected him at about 2pm on Wednesday.”

The ferret was being cared for at the charity’s animal rescue and re-homing centre at Balerno.

Staff at the centre said his owner had not officially named the ferret, who is believed to be around two-years-old, but referred to him as “Wee man”.

Senior Inspector Jenny Scott said at the time: “When I arrived to collect the ferret the staff had managed to catch him and put him in a box.

“He appeared on platform four at about 7pm when the train from London was in the station.”

The ferret may have followed the tracks all the way into the busy station, or could have jumped aboard a train at either Slateford or Kingsknowe stations