Five pound notes are back by popular demand 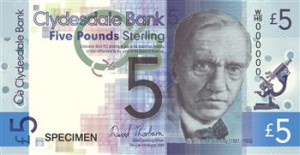 FIVE pound notes will make a comeback to Scots cash machines later this year – thanks to increased public demand.

The blue notes, which are notoriously hard to come by, will return to ATMs north of the border, with Clydesdale Bank confirming it be stocking 90 out of 939 Clydesdale and Yorkshire Bank hole-in-the-walls with fivers.

Clydesdale has not stocked any of its cash machines with £5 notes since the early 1980s.

And Tesco Bank say their Scottish cash machines will be stocked with more fivers thanks to the success seen in England and Wales.

The move follows the announcement by the Bank of England that it will be doubling the number of £5 notes in circulation and filling up cash machines with them.

The plans have been welcomed by consumers as it has been revealed that many like to have £5 notes in their wallet or purse and also enjoy having the option at ATMs.

According to a survey by Tesco Bank almost a third of people cite budgeting as a reason to carry the notes instead of tens and twenties.

And 44 per cent of women say they see this as a way of helping them to curb their spending habits.

The findings also show over 80 per cent of customers like being able to withdraw £5 notes and 53 per cent are more likely to withdraw smaller amounts from the cash machine if £5 notes are offered.

Stan Paliwoea, a marketing professor at Strathclyde University, said that banks should have stocked more ATMs with £5 notes years ago and welcomes the move.

He added: “I think it’s overdue. I was down at the ATM on George Street in Glasgow and it only dispenses £20 notes. I don’t think that’s sufficient.

“There are many occasions during the course of the working day you are maybe buying a newspaper or a sandwich. If you are handing out a £20 note you are nobody’s friend. You can actually hear people growling when you give it to them.

“Why should we have to take that stick when it’s the only note that the back is issuing?”

Mike Pretious, lecturer in marketing, retailing and consumer studies at Edinburgh’s Queen Margaret University, added that £5 notes mean than you don’t have to carry around a lot of change and risk losing it.

He said: “I think there is a need for a denomination of note that is smaller than the £10 otherwise we end up with a pocket full of change, certainly if you are a guy.

“It’s worthwhile having a £5 note to give as a gift to a small child when you are visiting family and friends because £10 or £20 might be too much for children.

“I think the £5 note fits the gap quite nicely and I think it’s something consumers would not be happy to see the end of.”

And Neil Duncan-Jordan, national officer of the National Pensioners Convention, said that the move will be important to pensioners.

He added: “If the demise of cheques is on the way, more and more pensioners may turn towards a more cash based way of running their affairs.

“The £5 note may be seen as a more convenient way of paying for smaller items than using debit or credit cards.”

Figures from Clydesdale Bank show that the number of £5 notes in circulation has increased by nearly ten million over the last three years indicating the popularity of the note.

But a spokesman for the British Bankers Association has revealed the reason why banks have not been stocking ATMs with £5 notes. He said: “You need to replenish them twice as often and there are twice as many security issues.”

A Clydesdale Bank spokesperson said: “We are fully committed to reintroducing £5 notes to our ATMs later this year and we regularly review the supply of notes to ensure we meet market demand.”

A Tesco Bank spokesperson said: “We know our customers want to withdraw five pound notes from our ATMs, which is why we are putting them into our cash machines at selected Express and Metro stores across the country.

“We have started in England and Wales, as the Bank of England has recently issued supplies of new £5 notes, and plan to introduce them to our Scottish ATMs as soon as an adequate supply becomes available, which we are hoping will be later this year.”

It is believed that RBS and Bank of Scotland also have plans to stock more ATMs with fivers.

RBS currently have eight cash machines in Scotland that issue £5 notes while Bank of Scotland have none.