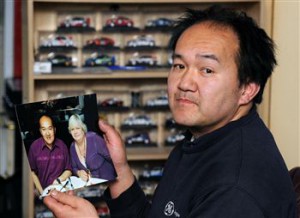 A BEREAVED husband claims he could be kicked out of his home because his benefit-fiddling wife never included him on the council tax.

Alan Fong, 45, recently discovered that his wife of almost 15-years, who died last year, had not registered him on their tenancy at the council-owned flat in the Broughton area of Edinburgh.

Isabella Currie, 53, who choked on a piece of food and subsequently had an asthma attack on Christmas Day, was falsely claiming housing benefit and a single person’s rent and council tax allowance, believed to add up to 26,000.

But Mr Fong, a driver and valet, said he had no idea his wife was a fraudster, but now faces eviction from the property he insists he has lived in for five years.

The bewildered man said the City of Edinburgh Council do not believed he has been staying there, and that he was given an ultimatum during a meeting with a housing officer – just four days after burying Mrs Currie.

He said: “They gave me an ultimatum – either I admit my wife’s responsibility and pay back the money and they might think about giving me the tenancy, or I admit I wasn’t living there, hand in the keys and they forget the whole thing.

“I was shocked after finding all this out about my wife.

“I was angry, I couldn’t understand why she had done it.

“She was in debt so that could be the reason, but I didn’t find out until after she had died.”

Since his wife’s death, Mr Fong found a letter in her handbag addressed to her from the council which was dated March 2009 and asked directly if she was living with a Mr Alan Fong.

A copy of her response letter was also in the bag and shows that she denied knowing him, saying “he was just someone who occasionally parked his car outside the flat.”

Mr Fong said: “If someone had done an investigation, they would have realised I was staying there.

“The council said they don’t believe that I lived at the flat because after I was made redundant last year, I signed on for job seeker’s allowance and used my mum’s address.

“I was staying there two days a week because she wasn’t feeling well, but I was living in the flat the rest of the time.”

Mr Fong, who claims to have provided the council with a copy of his marriage certificate, as well as bank statements and wage slips with the flat in question’s address on them, says he was sent a letter in February asking him to surrender the keys – but he refused.

He said two weeks after Mrs Currie passed away he found a receipt from a pawn shop for her wedding ring – which he never knew she had sold.

And now he cannot find his own ring and believes she may have pawned it as well.

Mr Fong added: “I don’t feel differently about her.

“She was my wife. I’m just wondering why she did these things.”

A spokeswoman for the council said: “This is an extremely complex case which is currently in the hands of our legal services team.”