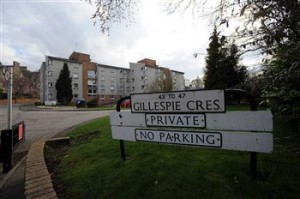 A PENSIONER may have lain dead in her sheltered housing complex for up to five weeks, it was revealed today (Tue).

The body of 66-year-old Margaret McLean was finally discovered inside her Edinburgh flat after neighbours reported a terrible smell.

Newsagent Mohamad Afzal said today he raised concerns about the pensioner more than a month earlier but was told she was “fine”.

An investigation in to the death will examine whether movement sensors – devices meant to give early warning that an elderly person needs help – were working properly.

Newsagent Mr Afzal has checked his written records which show the last time she paid for her papers was on February 6.

He said she failed to show up at his Bruntsfield shop to pay for her papers on February 12.

A few days later he told home helps of his concerns.

Mr Afzal, 53, said: “The home helps came back the following day and said they had asked staff who told them she was fine.”

Ms McLean failed to show up the following week and on February 24, the paperboy said he could not get the paper through the letterbox.

But it was not until March 15 that the discovery of Ms McLean’s body was made.

Mr Afzal said the reputation of the housing complex was good. “It’s quite upsetting,” he said. “The whole idea of moving into a sheltered housing complex is that people can be looked after better.”

Tenant representative David Hay, 70, said he had met with officials from the housing association. “I had a meeting with the chief executive and I have been given reassurances that there’s an in depth enquiry going on and it will not be completed for a few weeks,” he said.

He said they wanted to make sure that sensors that detect movement in the flats were working properly.

OAPs at the complex also said they told staff something may have been wrong but claim nothing was done.

One resident, who asked not to be named, said: “This is an outrage. To have someone die and the body to lie for five weeks is an obscenity.”

Another, who also wished to remain anonymous, said: “Residents in the houses nearby had already complained about the smell. It seems no one had put two and two together.”

One resident said on the day Ms McLean was found he walked by her door and it smelled “like somebody had died”.

He saw paramedics at her home when he returned home later that day and the smell was even worse, he said.

The resident said: “I was surprised they took so long to find her. It makes you wonder if this could happen again.”

Last night a spokeswoman for the Viewpoint Housing Association, who run the development, said a probe was underway.

She added: “We are working with the police and the family of the woman who has died.”

A Lothian and Borders Police spokeswoman said: “Officers were called to an address in Gillespie Crescent on Tuesday, March 15, following the discovery of a 66-year-old woman’s body.

“There are no suspicious circumstances surrounding her death and a report has been sent to the procurator fiscal.”