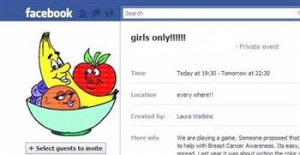 THOUSANDS of female Facebook fans will today (Wed) post names of fruit in a bid to baffle men and raise cancer awareness.

Many male users of the social networking site were bemused last year when women suddenly started posting the names of colours.

It turned out the colours were of their bras and the whole stunt was intended to raise awareness of breast cancer.

This year women are being urged to post the name of a fruit that reveals their “relationship status”.

So if the word “pineapple” suddenly appears as a Facebook user’s status it means their relationship is “complicated”.

In all, there are 10 types of fruit word women can post, including “avocado” for “I’m the other one”.

Women Facebook users from around the world have been invited to the event, and more than 600,000 have already signed up.

Clare Balfe, 24, from Greenock, has already posted Blueberry – “I’m single” – as her status.

She said: “I wanted to support this after the success of the bra campaign from last year.

“If it gets anybody talking about breast cancer then it has to be a good thing. And as Facebook is such a huge forum it is likely to get the message across.”

The identity of the woman who originally started the campaign is not known but  Laura Watkins from Adelaide in Australia changed the original concept to include links for donations for breast cancer charities and reminders to women to check for lumps.

She said: “I only sent it out approximately three weeks ago to about 100 girls. They passed it on and it’s just gone crazy.

“A very close family friend had a full mastectomy not too long ago and her strength is truly inspirational. I believe that there needs to be more awareness for breast cancer not only in October but 365 days a year.

“If every person whose inbox this event has reached donated just one dollar that would become many millions.

“I hope that even if people think it’s “LAME” because it’s not the most conventional method of advertising, that they read the info and even if that one person checks their breasts and finds a lump, somehow this event might just change their life.

“I feel Facebook has a great way of reaching so many people , and I may only be one little person but with my friends, and so forth, this world is so small and we need to look after each other.”