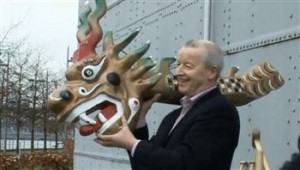 Cron Mackay, president of the rotary club, said the idea came when members attended a conference in York last year and went along to the city’s own Dragon Boat Race, which has been successfully running for eight years.

Mr Mackay said: “The event in York has raised over half a million pounds for charity but the Dragon Boat Events company told us we could do better because we have a much better venue here than York’s river situation.

“The idea behind the dragon came from China, who hold an annual event to celebrate the legend that a youngster rebelling against the hierarchy there.

“Our event, on 5 June, coincides with the same weekend as the Chinese holiday.”

Up to 50 teams can enter with 20 allowed in each group.

Mr Mackay added: “We have had more than 50 notes of interest so far, which is the number we are aiming to get as it would mean we would have nearly 1,000 participants.

“Every penny raised on the day will go to charity as each team will give 75 per cent of their total to their chosen charity and the remainder will be handed over to causes supported by the Rotary Club.

“We work closely with Cyrenians, who take food from supermarkets that is past its sell-by-date and give it to the homeless before the use-by-date is up.

“They are going to put two teams in.

“Each team can have 16 people in the boat at any time, with a drummer and another three reserves. But it is an all-day event with lots of races, so everyone will get a shot on the water.”

The races will run parallel to Ocean Terminal shopping centre, which Mr Mackay says will help to pull in up to 10,000 spectators.

Applications for the event will be taken until the end of April and costs £500 per team.

Mr Mackay said: “This promises to be a truly spectacular event with stalls, a tented village and local bands to complement the racing.

“I am confident competitors and spectators will have a great time and help us to raise a huge amount for charity.

“There are a dozen rotary clubs in Edinburgh, and although we are small we believe we can do big things.”

The total amount raised will be announced at a post-event dinner in the autumn.