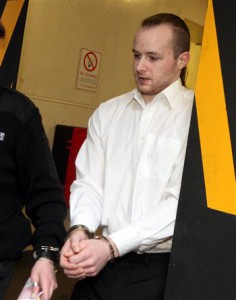 One of his court appeals cost almost £80,000, an incredible 40 times the average for such cases in Scotland, according to a freedom of information request.

Mitchell, who murdered his girlfriend Jodi Jones in Dalkeith, Midlothian, in 2003, has already received public funds for four unsuccessful appeals and a fifth is reportedly underway.

Last night, taxpayers and justice campaigners united to demand an end to the “ridiculous” levels of legal aid spending on Mitchell.

His victim was just 14 when her naked and mutilated body was discovered behind a wall in a wooded area near her home.

Judge Lord Nimmo Smith said the photos he saw of her injuries were the worst he had ever seen.

Mitchell, who was 15 at the time, was sentenced to a minimum of 20 years in jail but has fought his conviction ever since.

We asked the Scottish Legal Aid Board (SLAB) to provide details of money provided to Mitchell’s defence team since his conviction.

SLAB, who admit the average cost of legal aid for criminal appeals in Scotland is just £1,845, revealed that:

*Yet more legal aid costs are expected as a result of a second appeal against sentence in February this year, which was dismissed by judges at the Court of Session in less than a minute.

Following that case, Mitchell’s mother, Corinne, stated: “The fight goes on. It is not over.” Asked what the next stage of the “fight” was, she replied: “You’ll see.”

It was then reported that Mitchell is planning a fifth, publicly-funded appeal, this time against his own defence team at the time of the original trial.

It is understood that lawyers for Mitchell, now 22, will argue that mistakes were made during an elaborate reconstruction which was intended to clear his name.

A spokeswoman for Mothers Against Murder and Aggression, a charity which helps the families of crime victims in Scotland, said: “It is absolutely ridiculous that he has appealed four times.”

“If you’re convicted of a crime you should not be able to appeal unless new evidence comes to light. It re-victimises the family of the victim. They have all this to go through again. It’s just not on.”

A spokesman for Petal, a group which helps family and friends of murder victims, said: “The appeal process constantly seems to be weighted in favour of the convict and not in favour of the victim’s family.

“The sheer amount of money spent on legal aid for appeals and the fact that it’s so manipulated by the convicted person and the legal fraternity is nothing short of disgraceful.

“There must be millions spent on, quite frankly, playing the system. It continues to re-traumatise the families of victims. The system is sadly out of date.”

Emma Boon, campaign director at the TaxPayers’ Alliance, said it was “unfair” that Mitchell had claimed so much for appeals that had proved unsuccessful.

She said: “Legal aid is there to fund access to justice for those who could not otherwise fund themselves.

“It is important that each case is carefully considered to ensure that there is a legal basis for aid being given and it seems unfair that one man has claimed so much when each case of his has been unsuccessful.

“The Scottish Legal Aid Board says money shouldn’t be granted to those whose case is unlikely to succeed and it’s crucial that this and other principles are upheld, so that taxpayers’ money is not wasted.”

But a spokesman for SLAB defended the costs of Mitchell’s appeals, saying the process in his case was “complicated”.

He said: “Over the past five years the average cost per person for a criminal appeal is £1,845.

“There are a wide range of costs, depending on the nature of the appeal.  The Luke Mitchell case is a particularly complex one and will be at the higher end of the range of costs,” he added.

The spokesman added there was no cap on legal aid, neither on the number of times a person can appeal nor on the total that can be spent on an individual.

“The board grants legal aid after applying the tests set out in legislation and only pays for work that is required and is carried out with due regard to economy,” he said.

Nurse who threatened wife with axe remains on nursing register