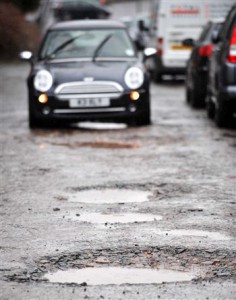 CASH-strapped Scots councils are spending millions on speed bumps while roads are littered with potholes.

Councils are installing the traffic-calming measures across the country while more than a third of streets are in desperate need of repair.

There are around 400,000 potholes across the country and it is estimated that it would cost £2.25 billion to repair them.

But more than 100 new speed bumps are to be introduced in Edinburgh this year as part of a £275,000 drive to improve road safety.

Fife Council have spent £109,00 on speed bumps and tables in the current financial year and are set to spend the same in the coming year.

And in Aberdeen, almost £36,000 worth of work is underway to install speed bumps.

Councils including Aberdeenshire, Clackmannanshire, East Ayrshire, Dumfries and Galloway, Glasgow, Moray, North Ayrshire, North Lanarkshire, Perth and Kinross, Renfrewshire, South Ayrshire, Scottish Borders, West Dunbartonshire and West Lothian have either spent thousands on speed bumps and tables in the last year or are planning to do so this year.

Motoring groups have hit out and said that local authorities have their priorities wrong.

Hugh Bladon, of the Association of British Drivers, said: “I am appalled. The roads are in a hideous state and it’s ludicrous for councils to spend money on speed bumps that could be used to repair the road network.

“These devices have little impact on safety, slow down emergency service vehicles and are bad for the environment.”

Neil Greig, of the Institute of Advanced Motorists, added: “Most will be going into areas where speed limits are already low and fatal accidents are extremely rare.

“I’d question whether councils should be spending so much on them when the roads are in such a state.”

There are now more than 12,000 speed bumps in Scotland and motorists are forking out up to £150 million a year to repair car damage caused by them.

But Scots councils say that speed bumps are cost effective and do prevent accidents.

A spokesman for the City of Edinburgh Council said: “Speed bumps bring down speed, reduce crashes and are cost effective.

“We do use alternatives where emergency services need fast access.”

A spokeswoman for Aberdeenshire Council said: “The majority of these traffic calming schemes are installed to allow the speed limit for residential streets to be reduced to 20mph.”

Five Qualities to Look for in a Boiler Repair Service