Soldiers banned from finishing charity cycle because of health and safety 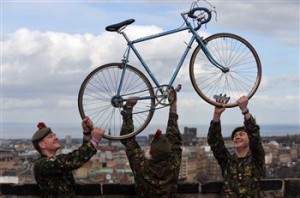 SCOTTISH soldiers have been banned from finishing a charity cycle trip at Edinburgh Castle because of “unbelievable” health and safety rules.

The squad of six are due to complete a gruelling, 1,750-mile trip by bike from Italy to Scotland tomorrow (Mon).

But they have been forced to abandon the original plan to cycle all the way to the Army HQ inside Edinburgh Castle in case they have an accident.

Health and safety rules ban cycling in and around the castle to protect riders and pedestrians.

Historic Scotland, who run the castle, have refused to relax the restrictions, meaning the soldiers have to end the trip hundreds of yards away in the Royal Mile.

The ban is all the more controversial because one of the team was recently awarded a medal for bravery in Afghanistan.

The soldiers, all from 3 Scots, The Royal Regiment of Scotland, have spent 15 days cycling home from the Second World War battlefield of Monte Cassino.

They hope to raise around £50,000 for veterans’ charities.

Among the cyclists is Military Cross winner Sergeant Richard Clark, 26.

He was honoured for silencing a Taleban machine gun, crawling on his belly towards the enemy and killing several of them with rifle fire, grenades and rockets.

Despite the bravery of Sgt Clark and his comrades, Historic Scotland has refused to make an exception for the charity trip.

A castle employee was even caught on camera brusquely lecturing the troops on cycling safety before the trip began.

After one soldier briefly cycled inside the castle for a publicity shot , the worker marched over and told the team: “Cycling can be involved off the esplanade but certainly not in the castle, it’s just not allowed.”

As serving soldiers, the members of the team are not allowed to comment.

But Major Frank Morton, assistant regimental secretary of the Royal Regiment of Scotland Association, blasted the decision as  “unbelievable”.

He said: “I know that they can’t cycle to the castle because I’ve been caught on my bike before.

“I don’t know why the rules are what they are.

“I used to climb trees and things when I was a boy – pylons and everything.”

He said: “It is ironic that soldiers on a fantastic charity ride using one of the healthiest and safest forms of transport are to be banned on the grounds of health and safety.”

He added: “We trust that the authorities will order the Dutch Mounted Bicycle Band to perform without their bikes during the 2011 tattoo.

“Goodness knows how many spectators will be killed or injured if bikes are allowed!”

Alison Johnstone, a  Green candidate in the Scottish Parliament election, said: “I presume the group haven’t got a health and safety officer trailing along after them the whole way.

“If they can get from Italy to the top of the Royal Mile without too many scrapes it’s probably OK to let them take their bikes to the Castle as well.”

Even The Royal Society for the Prevention of Accidents questioned the ban.

A spokesman said: “If the castle have been warned they should be able to set up an area where the cyclists can be welcomed home.”

A Historic Scotland spokeswoman claimed it had always been their intention to end the trip in the Royal Mile.

She said: “The cycle team will conclude their journey at the end of the Esplanade as planned to avoid any congestion from the ongoing Tattoo stand works and visitors to the castle.”

But an earlier press release sent out by the Army  clearly stated: “The journey will end at the Regimental Headquarters at Edinburgh Castle.”