GROWING numbers of do-it-yourself tattoo kits being sold to youngsters could lead to health risks in the future, experts have warned.

The kits are being sold for as little as £30 online and ‘tattoo parties’ are being held across Scotland where teens and young adults are branding themselves for life.

The Chartered Institute of Environmental Health (CIEH) recently issued a warning about the threat to public health.

Research carried out by the CIEH revealed that almost half of tattoo parlours questioned failed to ask customers about their health, age, or gave adequate advice about the after care.

Emma Deegan, 24, got her name inked onto her naval four years ago at a party in Glasgow, and is urging others to think twice before getting a tattoo.

She said: “There isn’t a day goes by that I don’t regret getting ‘Emma’ tattooed on my stomach.

“I got it four years ago at a house party I was at and I’d had a few drinks.

“There were about 12 of us there who got them done and mine wasn’t the biggest or worst.

“Some people at the party were a lot younger than me and some were probably not old enough to get them done legally.

“If you look at my tattoo it isn’t even done properly.

“Back then that type of party was quite rare.

“Now it’s happening all the time.

“The one thing about the guy who did them was that he used different needles for every one – meaning I didn’t need to worry about catching anything.”

Julie Barratt, director of CIEH, said: “Tattooing is an invasive procedure that, if carried out incorrectly or unhygienically, can result in life-threatening blood related illnesses such as hepatitis and HIV.

“It is essential that appropriate information is sought and advice is given by tattooists to their customers both before the procedure and afterwards to ensure the health of both parties is not compromised.

“For health practitioners the fact that some of these procedures could be taking place in an unhygienic environment by untrained children – in the case of DIY tattoo kits and home tattoo parties – is of huge concern.”

And a leading charity for Hepatitis C sufferers – The Hepatitis C Trust – claims that even if needles are changed between each tattoo, viruses can survive in ink pots.

Charles Gore, chief executive, said: “The rise in DIY tattooing is particularly alarming for viruses such as hep C.

“Most people don’t realise that transmission is not just about needles – sharing any equipment, including things like ink pots, can be a risk.

“Often hepatitis C has no symptoms for decades so anyone who has had a tattoo that might not have been safe, at home or on holiday, should thing about getting tested.” 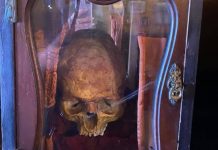