TRANSPORT chiefs in a Scottish city have issued an eight step guide on how to use a bus.

Lothian Buses posted the guide on their website, giving travellers helpful tips such as “Find the correct bus stop for the bus you want. ”

The step-by-step instructions, uploaded last month, have been branded “bedazzling in its condescension’ by critics.

The cartoon instructions also tell passengers they need to check the fare for their journey and reminds them to have the money ready.

They are instructed “signal clearly for your bus to stop’, told to tell the driver what fare they need and then to pay for it.

After being told to take their ticket, the guide advises “enjoy your journey.”

The guide also includes a helpful tip for passengers on what to do when they get to their destination – “Press “bus stopping’ button when approaching your stop.”

The publically-owned company has also made a three minute video, starring Grant Stott, which details how to get around the “colourful and vibrant capital city’ on public transport.

He says that there are bus stops all over the city

Stott, who has fronted the company since 2009, helpfully tells viewers that the buses are “easily recognizable, either by their red and gold harlequin design or by the new modern maroon and white colours.”

Standing in front of a bus shelter, 43-year-old Stott proudly proclaims: “There are bus stops like this one all over the city and into the Lothians. Each one has a flag which tells you which buses are going to stop at that stop. ”

Stott also informs bus users that if they “are in a wheelchair or have little ones in a buggy or pushchair the driver will make sure you board safely and securely before driving off.”

Viewers then see Stott take a bus journey, carefully following each of the instructions in the company’s guide, before he helpfully tells them:

“When you are near your destination and you want to get off, press the stop button. ”

As he disembarks a rather maddened-looking Stott added: “Travelling round Edinburgh by bus really is that simple. ”

The Taxpayers Alliance has blasted the handbook and video, calling them a “waste of money.”

Campaign Director Emma Boon said: “Taxpayers will be frankly stunned that Lothian Buses has decided to produce this wholly unnecessary guide. Not only does it insult people’s intelligence, but it is a waste of money too.

“Passengers have been successfully hopping on and off buses for decades all over the world without the need for a video guide. The mind boggles at what this whole fandango must have cost. ”

“It really is that simple”

Lothian Buses did not reveal how much the video had cost, but industry experts estimate the bill to be at least £1000 – before any fee charged by Stott is added.

The company defended the video, saying it helped bus users be more confident.

Ian Craig, managing director of Lothian Buses, said: “Customer research indicates than non-users experience a lack of familiarity and uncertainty when it comes to using buses, and it is important to address this issue so that everyone feels comfortable and confident using public transport. To date, we have received positive feedback from our initiative. ”

It’s not the first time a public body has been accused of being patronizing.

Last year the Government was criticised for handing teachers in state schools a checklist for spotting poor children while earlier this year a number of public bodies, including the Department of Health, HM Revenue & Customs, the Department for Culture, Media and Sport and Sport England, sent employees on courses to learn how to walk.

Lothian Buses isScotland’s only publically owned bus company and has previously been criticised for wasting money on rebranding their buses to take account of historical connections in the city.

The full eight step guide to using a bus 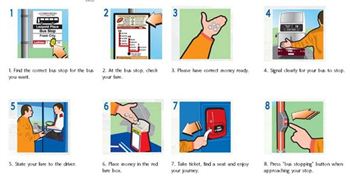