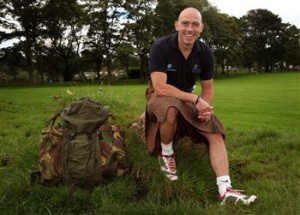 A HEROIC Scot is hoping to become the first person in history to row across an ocean and run across a continent.

The 44-year-old was due to set out today (sat) on the second leg of his remarkable journey – running 3,100 miles from San Francisco to New York.

Not content with that, Don, from Bellshill, North Lanarkshire, is hoping to shave a day off the 30-year-old record for running across the US.

The current record stands at 46 days and has been held for around 30 years.

Breaking the record will require Don – who is wearing a kilt for the entire journey – to run on average 68 miles every day.

The route will take him through 12 states and some of the harshest terrain and weather conditions in North America.

He will come face to face with snakes and spiders and he will also be running into some of the most dangerous parts of towns and cities.

There will be some stretches of road where there will be nothing but wilderness for 2-3 days. And Don will have to rely on his own his own intuition and skills to find water and safe places to sleep.

But Don is optimistic and says that nothing is going to stop him from completing the challenge.

He said: “The animals and things like that shouldn’t pose much of a problem if you’re just on your guard. But I think people might be more of a problem.

“If you run into the wrong area of some towns or cities at the wrong time of night you might find yourself in a bit of danger but you can’t let it stop you from doing it.

“You’ve got to deal with any situation that comes up and worrying about it before it happens is pointless.”

He added: “I think if I can break the continental running record I don’t know if anyone will ever do that again. So that’s quite an incentive as well. It will be good to be unique in some ways.”

Don will set off from the City Hall steps in San Francisco on Saturday and hopes to reach the steps of City Hall in New York by mid-October.

He said that the most difficult thing will be doing the whole run completely unsupported.

He added: “That’s going to be the most difficult thing without having anyone there as we do on the Atlantic rows. When you are tired and sore the temptation is just to lie in your sleeping bag. But I think it will be fine. It’s all about how much you want this. It could be life-changing if I can do it. It’s 80% mental.”

Don worked as an engineer until he was 30 but decided to have a career change to a sports therapist.

His last job was as a physiotherapist with Partick Thistle Football Club.

“You don’t quite get the satisfaction that you do on these expeditions. This has been about 8/9 years I’ve wanted to do this. So it’s something that needs done because I’ll always want to do it if I don’t do it now.”

Don has been an Ultra Marathon runner for the past eight years. His personal bests include 20 hours, four minutes for the 96-mile West Highland Way race.

The furthest he has ever run was his attempt at the 874-mile Land’s End to John o’ Groats UK run late last year. Unfortunately the snow struck but he managed to run most of England before having to stop.

This will be his biggest running challenge yet.

Don said: “I would love to run two hours on two hours off to give myself some rest so 12 miles every two hours. But the breaks will come when they need to come I think. “

But the runner is not being too strict with his diet and says that he may have some pizza and beers before he heads off adding  that it is “not ideal but it certainly won’t harm the cause any”.

With him he will be carrying expedition foods including energy gels and snacks but he said, “I’ll possibly live off McDonalds, coffee and muffins all the way across”.

Although he is disappointed he won’t have any Irn-Bru.

Don will be carrying around 25 kilograms on his back including his tent and will have to navigate himself through the route.

He estimated that he will go through around ten pairs of trainers on the run but will only be taking four with him at first.

He is hoping for some Forrest Gump-like support and encouraging anyone in the States to join him for a few miles – or even give him a bed for a few hours.

He will be joined on the first five days by Caroline Mckay who works at the Royal Botanic Garden Edinburgh but after that he will be on his own.

Don is hoping to raise at least £30,000 for Help for Heroes and the Wounded Warrier project in America.

He said: “They are very deserving of any support they can get. I’ve got a few friends who are in the army and the special forces so it would be lovely to support them in some way.”

He has been sponsored by Artemis Investment Management who have provided all of his equipment.

GlenIsla Kilts and Calzeat & Co Ltd have also provided him with his kilt and Somnio Inc with his trainers.