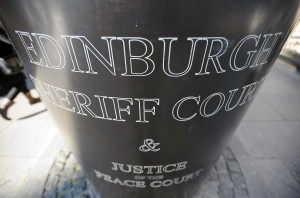 A SCOTTISH footballer ran away from police after he was caught with cocaine, prosecutors claimed today.

Hibs player Garry O’ Connor is alleged to have been in possession of the drug in streets in Edinburgh and at one of the city’s police stations, the city’s sheriff court heard.

The 28-year-old, who has 16 international caps for Scotland, is also said to have fled police officers as they were trying to get his details.

O’Connor, who was listed in court papers as living at Dirleton, North Berwick, was not at Edinburgh Sheriff Court for the calling of the case.

Defence agent Jonathan Campbell said he was representing the player on behalf of another legal firm. He said: “I understand that they (O’Connor’s legal team) have as yet been unable to take his full instructions. I ask that the matter be continued for a period of three weeks.”

O’Connor was alleged to have been in possession of cocaine in Edinburgh’s Hope Street Lane, the city’s Rose Street Lane North and St Leonards Police Station.

He is also said to have resisted, obstructed and hindered Lothian and Borders constables Kathy Eager and Andrew Morrow in Hope Street Lane and to have run away from the officers while they tried to establish his details.

Both of the alleged offences are said to have taken place on May 14.

But after just one season in Eastern Europe, O’Connor’s former Hibs boss Alex McLeish took the player to English Premiership side Birmingham City in a deal worth £2.7m.

The big striker struggled to make an impact in England and was loaned then sold to Barnsley.

After struggling to to regain fitness following a niggling hip injury, he was freed and resigned for Hibs on a one year contract in June this year.

He has agreed an initial one-year deal with the club and if all goes according to plan he has said he would consider a permanent stay.

O’Connor has scored four times for his country.

The case against O’Connor was deferred by Sheriff Derrick McIntyre until September 28.