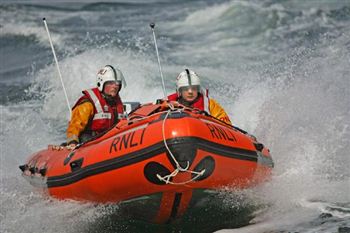 LIFEBOAT crewmen had to be airlifted to safety following a hoax call this afternoon (tues).

The team from Queensferry lifeboat station were participating in a search for a reported casualty with a broken leg on Cramond Island in the Forth.

A rescue helicopter had been scrambled to help in the search but came to the aid of the men after they were unable to return to their boat due to rough seas.

The crew were airlifted to the mainland shore where they were picked up by the lifeboat.

The RNLI said nothing had been found on the island and all units had been stood down.

It’s now believed the call was a hoax and a Coastguard spokesman confirmed the case was in the hands of the police but refused to comment further.