Transport Scotland to bill Edinburgh Council for taking over trams 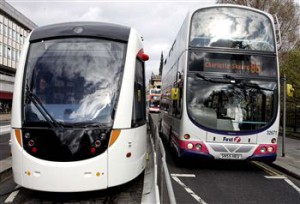 A GOVERNMENT agency is set to bill Edinburgh Council for hundreds of thousands of pounds for taking over the trams project.

Transport Scotland is to manage the project in a bid to ensure it is completed by summer 2014 and within the latest £776 million budget.

But the council will be expected to pay Transport Scotland for the cost of its staff.

Opposition politicians said the government’s move was too late and accused ministers of a “brass neck” in expecting the council to pay Transport Scotland’s staff costs.

The Scottish Government announced it would pay the remaining £72million of its agreed £500million funding for the trams which it withheld when it looked as though the route was only going to Haymarket.

Ministers will have a power of veto strategic decisions but have insisted that responsibility remained with the council.

City Labour transport spokeswoman Lesley Hinds said: “When the Scottish Government agreed to pay the £500million, they took Transport Scotland off the project management board and for four-and-a-half years they have paid out millions of taxpayers’ money without scrutinising how it was spent.

“At long last the government is now taking some responsibility. It’s a bit of brass neck – after four-and-a-half years of not taking responsibility, they are now going to charge Edinburgh Council taxpayers for it.”

Edinburgh’s Tory group leader Jeremy Balfour said: “They opted out for all these years and suddenly, just when things look as if they might have resolved themselves, they are going to take all the credit.”

He welcomed the Transport Scotland involvement but said that he was concerned about ministers having a power of veto over decisions made at local level.

But Alex Neil, the Infrastructure and Capital Investment Secretary, said: “We are going to take a very proactive approach to ensure the remainder of this project goes according to plan.”

Transport Scotland staff have worked on successful projects such as the M74 extension – which the government says was opened ahead of time and within budget.

Council leader Jenny Dawe said the council and Transport Scotland had agreed a closer a closer relationship would be “beneficial”.

Sue Bruce, chief executive of the council, said: “We are putting in place new arrangements to ensure there is the best possible governance and operational oversight. That will be complemented by the technical, project management expertise that Transport Scotland offers.”

Important maintenance gets underway on the M77 Northbound