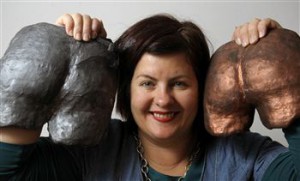 A SHOP is offering the ultimate in cheeky presents for partners – a plaster cast of body parts.

The Wee Treat in Edinburgh takes casts of any body part the customer wishes and they are often gifted to their partner for anniversaries or Christmas.

The process of taking the cast takes 40 or 50 minutes – depending on the body part.

And the completed cast is ready for collection in around seven days.

Owner Lee Watson, 37, said: “Our customers tend to be women coming along to have bums, boobs and bumps done – although we had a man who had his chest done, and it looked great.

“Often the people who come in are getting it done as a gift for an anniversary or for Christmas. They are really giving the gift of themselves.”

But owner Lee said that they do draw the line at more “intimate” castings.

She added: “We do not do intimate castings, although we have been asked.”

The Wee Treat opened its doors in Dunfermline in May, but Lee took the decision to move to Edinburgh as the majority of customers had come from the Capital.

Most pieces are created in metallic colours but can be painted in any choice of colours and there is an option of having a design added.

The average cost is around £39.

She said: “It went really well and the whole thing quickly grew arms and legs.

“I think all women – and it is usually women who have it done – have body confidence issues. To have this cast done and look at yourself as a piece of art rather then what is in the mirror is hugely beneficial to your confidence, because it’s all about being objective.”

Sarah Williamson, 26, who had a cast of her pregnancy bump made, said: “It was an amazing experience having my bump cast. It gave me something other than photographs to capture the memory.”

Emma Paterson, 32, said: “I hated my body after having my kids, then I had my breasts cast and it made me look at my body in a different light.

“What I saw in the mirror was bad, but the cast was brilliant.”