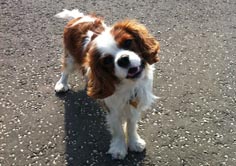 A YOUNG dog was killed by a hit and run driver in Edinburgh.

The one-year-old King Charles Spaniel escaped from a garden in the city’s Crew Loan.

It was chased by its owner but the young pup ran onto the road where it was hit by a maroon-coloured car on Crew Road North.

The driver slowed down following the collision which took place at around 10.20am yesterday (Tue) but he then drove off.

Police are now urging anyone who was in the area and witnessed the incident to come forward.

The driver is described as male, around 40-years-old, Asian and wearing a turban.

A police spokesman said: “The dog’s owner is utterly distraught at the loss of her pet and attempted to get the driver to stop after the collision.

“We are now carrying out local enquiries in the area to identify the car and anyone with information that can assist officers with their investigation is asked to contact police immediately.”