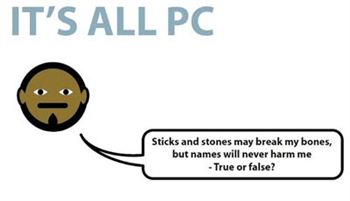 A SCOTTISH police force has warned staff to stop using the phrase “manning the phone” to try and avoid accusations of sexism.

Tayside Police officers are instead being told to say “staffing the phone”.

Details of the language laws are included in a chapter of the Tayside Police Diversity Awareness Guide called “It’s All PC”.

Commentators have derided the guidebook and branded it a waste of money.

The document aims to root out language that could offend ethnic minorities, gays, women and people with disabilities.

But it even recommends staff use the phrase “minority ethnic” rather than “ethnic minority”.

The latter phrase fails to “fully describe” the “origins, background or identity” of some people, claim the authors.

And the words ‘migrant’ or ‘economic migrant’ are both preferable to ‘immigrants’, because the term is “commonly applied to people from ethnic minorities, but rarely to white migrants”.

The word “coloured” is also thought to be patronising because of its association with “the South African apartheid system”, and is outlawed by the force.

Authors of the handbook recommend using the phrase “visible minorities” instead.

The term “mixed-race” is acceptable, but not in every case, the authors claim. The terms “mixed-parentage” or “bi-cultural” are “more acceptable”.

The words ‘Chinky’ and ‘Oriental’ are “very offensive” and should be avoided.

Using the words ‘Paddy’ or ‘Mick’ to refer to Irish people, or ‘Taff’ to describe the Welsh is also unacceptable.

The phrase “deaf and dumb” should be replaced with “deaf without speech” because dumb has associations with “lack of intelligence”, the handbook says.

‘Cretin’, ‘spastic’, ‘cripple’ and ‘mongle’ are also out of bounds.

In describing the logic behind using the phrase “staffing the phone” the guide says: “The English language appears to have evolved on the assumption that the world is male. We say ‘the man on the street’, or ‘manning the phones’, and talk about the tax man, and so on.

“This approach can make women, and their contribution to society, seem invisible. With a little thought and imagination it is easy to ensure that the language we use is not gender specific. For example ‘manning the phones’ can be replaced by ‘staffing the phones’.”

The word lady is also banned by the force in certain contexts. “The term ‘lady’ is not universally accepted and should not be used unless in conjunction with ‘gentlemen’,” the guide says.

And there are “particular issues” around the use of the word ‘girl’.

“Adult females should be referred to as women not girls,” claims the guide. “There is no set age at which a girl becomes a woman, but a reasonable guide is that after sixteen, she is no longer a ‘girl’, but rather a ‘young woman’. Generally no offence will be intended, but we should obviously not refer to adults as if they were children.”

Staff are also being advised not to use the term “Christian name” to try and avoid alienating people from other religions.

Officers are also being encouraged to avoid saying “For God’s sake” and “Jesus Christ”.

“Bible basher”, “Happy Clappy” and “God Squad” are also offensive, according to the handbook.

Officers are also being told that using the phrases “Some of my friends are gay”, “I don’t think of you as gay” and “You being gay isn’t a problem for me” are patronising.

Staff are also warned they should not assume sexual orientation and are advised to avoid “clumsy” questions like “Are you married?”, “What does your wife do for a living” and “Do you have a girlfriend?”

John Midgley of the Campaign Against Political Correctness derided the language guide. He said: “People will be surprised that a priority for Tayside Police seems to be to fiddle around with everyday common words and phrases.

“I wonder how many people in Tayside are concerned about the use, for example, of the word manning? I am sure they would like to see more police manning the streets and catching criminals.”

Conservative justice spokesman John Lamont questioned the logic behind spending money on the guidebook. “It goes without saying that the vast majority of police officers conduct themselves in an exemplary fashion,” he said.

“But even when this does not happen, people will ask if spending public money on this guidebook is really necessary? Most police officers are smart enough not to need a guidebook to tell them that they are being offensive.”

“People will be surprised that a priority for Tayside Police seems to be to fiddle around with everyday common words and phrases.  I wonder how many people in Tayside are concerned about the use, for example, of the word manning – I am sure they would like to see more police manning the streets and catching criminals.”

The guide book says the label “politically correct” is “often used as an excuse, a criticism or an accusation by people unwilling or unable to take responsibility for their actions”.