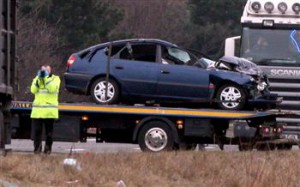 
FEARS have been raised that lives could be lost on Scotland’s rural roads because the UK Government refuses to roll out an in-car crash alert system.

In the event of a serious road accident the “eCall” device – activated by the same sensors used to deploy airbags – automatically calls the nearest emergency centre and transmits the exact location of the crash.

Nationalist MEP Alyn Smith says most other EU countries are implementing the system.

But the UK has refused to make it mandatory for manufacturers to install the devices in new cars.

The MEP welcomed a recent announcement by the European Commission that the system will be compulsory across Europe by 2015.

But, he said “thousands of lives” will be lost in the meantime.

Once set off the system establishes a telephone link to the appropriate emergency call centre and sends details of the accident to the rescue services.

This includes the time of the incident, the accurate position of the crashed vehicle and the direction of travel.

“For road crash victims every minute is crucial, this system will save lives and the fact that the UK Government won’t mandate for it for new cars is shocking,” said Mr Smith.

“Introducing this in 2015 is not soon enough for Scotland, the UK Government should roll this out now.”

Mr Smith believes the system would be especially useful on remote roads in Scotland where it can take a long time for accidents to be discovered if the occupants are unable to dial 999.

National figures show that three out of four fatalities occur on Scotland’s country roads resulting in an average of 199 deaths per year, approximately one fatality every two days.

“With so many remote areas in Scotland technology that speeds up the arrival of emergency services by an estimated 50% in rural areas is not just an extra option, it is a vital tool for saving lives.

“It costs less than £90 to install eCall in each new car and start saving lives,” he added.

Ellen Booth of road safety charity, Brake, said: “It’s vital road crash victims receive medical treatment as soon as possible. New vehicle safety technology can help to save lives in the event of a crash, and should be encouraged by the Government.”

And Kathleen Braidwood, road safety officer at the Royal Society for the Prevention of Accidents in Scotland said: “eCall could be of particular benefit following single-vehicle crashes in which a car may have left the road and a driver is unable to dial 999, especially in rural areas where there might be little passing traffic.”
She said it was estimated that eCall would prevent three percent of UK road fatalities by 2020 if fitted to all new vehicles.

Road Safety Minister Mike Penning said: “Britain has some of the safest roads in the world and technology has an important role to play in this, but it is important that each initiative is carefully considered on its merits.

“After considering the results of independent research we are concerned that the benefits of making eCall mandatory in all new cars will not justify the cost of implementing it in the UK.

“We have decided, therefore, that it would not be appropriate for the UK to support mandatory installation of eCall at this stage.”