A BABY boy was almost killed when a faulty electric blanket caused his home to go up in flames. 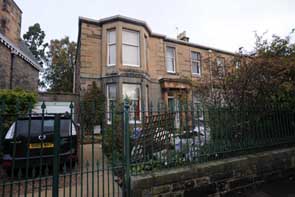 The blanket caused his parent’s bed and bedding to catch fire in the first floor property on Cobden Crescent in Edinburgh.

Five-month-old Jack Fulford was sleeping in a cot next to the bed when the flames broke out.

His mother, Harriet Fulford, was alerted to the blaze by a baby monitor when Jack began to cry.

Fire crews arrived at the house in the Newington area of Edinburgh at around 12.20am today (Thurs).

Baby Jack was taken to the city’s Royal Hospital for Sick Children, where he was treated for smoke inhalation.

His grandmother, Georgina Clayton, said:  “The blanket was on the parent’s bed. It was an old electric blanket. The baby was in a cot next to the bed and he had inhaled a lot of the smoke fumes so he had to be checked over.

“She [Mrs Fulford] was alerted to it by the baby monitor. I think he was crying and she went up to see how he was and she was horrified by all of the smoke.

“The fire brigade, police and ambulance all came and she took Jack to hospital for him to be checked over.

“He was in hospital for an hour and a half. They were just checking his oxygen levels as a precaution.

“He is fine. He was probably the least affected out of any of us.”

Mrs Clayton said that her daughter and grandson rang her after the incident and stayed with her overnight.

She added: “The one thing that comes out of it is anyone who has an old electric blanket should think about getting rid of it ASAP.”

A spokeswoman for Lothian and Borders Fire and Rescue said: “Crews were called at around 12.20am today to a fire in Cobden Crescent.

“The fire was caused by a faulty electric blanket.

“A five-month-old boy was treated at the scene before being taken to the Royal Hospital for Sick Children.

“This is a salutary reminder that electrical blankets should be checked every year to make sure that there are in good working order.

“By coincidence the Service is carrying out electric blanket testing in West Lothian today because every winter we deal with this type of incident and although in small numbers we want of reduce the likelihood of a repeat. In particular, don’t fold electric blankets when storing them as this can cause damage to the wiring. If in doubt get your blanket tested by a qualified electrician.”

The service used a high pressure hose reel and two breathing masks to tackle the flames.

Where Art I Wullie? CALA Launches Trail In The West End

OAP dies after setting himself on fire

Investigation begins as family home is destroyed by fire