THE FIRST of a fleet of trams being delivered for the beleaguered Edinburgh tram project was almost two hours late today.
The vehicle was due to arrive in the capital this morning (October 17) at the city’s new depot after travelling more than 900 miles from Spain.
But traffic hold ups on the city’s bypass meant the tram arrived a lot later than expected.
The vehicle’s ferry journey from Amsterdam to Newcastle was also delayed, according to city council officials.
Spectators attended the under-construction depot in the city’s Gogar area at 11am expecting to see the new tram, the first of a 27-strong fleet due to operate in the city by 2014. 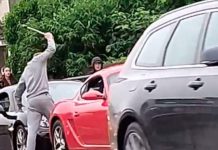