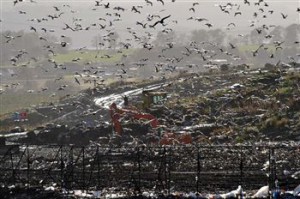 NINE workers and two paramedics were taken to hospital after a nitric acid leak at a recycling centre.

Workers evacuated a recycling plant at Lochhead landfill site near Dunfermline after they began coughing and suffering throat pains.

It is believed the acid came from a two litre container, which had entered a rotating drum used to separate waste.

A probe has now been launched into the cause of the leak so the incident does not happen again.

They evacuated the building where the waste was being sorted after they realised they were in danger.

He said the workers were taken to hospital as a precautionary measure.

Two paramedics were also exposed to fumes during the incident, he said.

“A two litre container of nitric acid came into the sorting facility,” he added.

“We are trying to ascertain which load it came in from. We will take appropriate action so this doesn’t happen again.”

He said the waste could come either from household rubbish or waste from dockyards.

The site is expected to be closed for a number of days while investigations continue.

All the workers involved are understood to be employees of Landfill Services, a private company separate from Fife Council, who operate the waste disposal site.

Firefighters, police and ambulance crews were called to the scene around midday.

The area around the container, which is used to separate different kinds of waste for recycling, was cordoned off for a number of hours.

The fluid was said to be 68% nitric acid and could not be cleaned up by firefighters, who had to call in a specialist company.

A spokesman for Fife Constabulary said there was no risk of danger to the public.

In high concentrations, inhaling nitric acid can damage the lungs.

“No members of the public have been injured during this incident and all of the emergency services have been present.

“The landfill site was closed and the area evacuated as a precaution, with all landfill operations suspended. Lochhead has now reopened but the materials recovery facility remains closed until decontamination procedures have been completed.

“Investigations into the incident will be carried out over the next few days.”

A special operations team and a number of ambulances were called to the scene at the recycling plant, said a Scottish Ambulance Services spokesman. He added: “Nine patients were taken to the Queen Margaret Hospital in Dunfermline to be examined for chemical exposure.

“Our special operations team were called as they deal specifically with people who have been exposed to chemicals.

“A couple of paramedics felt the effects of the leak, but they weren’t debilitated in any way.”