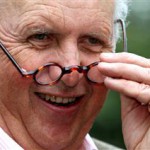 ONE of Scotlands best selling authors has taken to social networking site Twitter to showcase his latest work.

This morning (Wednesday) Alexander McCall Smith fans had the delight of reading a short story on the authors Twitter page.

But fans might have been disappointed to see that it was only four tweets long.

The author of the famous No. 1 Ladies’ Detective Agency, wrote the four chapter tale and introduced it as a “tiny story” before he launched into the first chapter.

The short story is about two men with moustaches.

The first chapter by the author, who is thought to be travelling in East Asia, was tweeted at around 5am British time. “Chapter 1: a grand hotel was so proud of its commissionaire, who had a splendid moustache, an adornment, much admired,” McCall Smith tweeted.

McCall Smith continued tweeting with the following three chapters of the short story.

“Chapter 2: His ambitious assistant started to grow a moustache too. The older man watched carefully: the young man would replace him.

“Chapter 3: He prevailed upon the manager to ban moustaches entirely on health and safety grounds. Absurd, but then we live in absurd times.

“Chapter 4: He said: I have experience, I have gravitas: it’s nothing to do with moustaches really. He should wait his turn. The end”

The best selling writer sold more than 20 million copies of his No.1 Ladies’ Detective Agency series, and has had his books translated into 40 different languages.

But 4000 followers got a taste of the authors’ literary works this morning for free.

Social media expert and managing director of social media company Contently Managed, Craig McGill, said the author isn’t the first to use the social networking site to his advantage.

“Good on McCall Smith for doing this and providing a little bit of entertainment to his followers. While he’s not the first and probably won’t be the last, it’s always great to see authors do this,” he said.

According to McGill, authors have now latched on to the relatively new phenomenon of tweeting in order to keep up with their fan base.

The likes of Stuart MacBride, Warren Ellis and Charlie Stross have all used it to reach out and build on their engagement with fans, he said.

“For many authors being on Twitter is a great way to build a loyal and lasting audience,” he said.

“From the fans’ point of view, it’s great as well – to get more insight from your favourite authors and perhaps even speak digitally with them. Who wouldn’t have wanted to be able to ask Charles Dickens or Jorge Luis Borges questions?” he added.

The quirky author has tweeted over 800 times with stories about his travels, poetry and other philosophical musings.

He has had three collections of his short stories published in book form in the past, including Children of Wax: African Folk Tales in 1991, Heavenly Date: And Other Flirtations and most recently The Girl Who Married a Lion: And Other Tales from Africa.