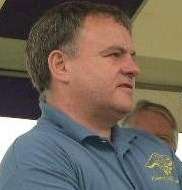 A SCOTTISH council boss has sparked a row by saying that critics of Jeremy Clarkson should be put up against a wall and shot.

Gerry Reynolds, the head of events and promotions at Highland Council, said he wanted to personally shoot “all the UK’s copycat complainers”.

Mr Reynolds said Clarkson’s remarks that public sector strikers should be executed were clearly tongue-in-cheek and it was wrong to constrain creativity.

But his comments were condemned today as “deplorable” and “aggressive”.

Writing in a blog post titled ‘Shooting the Complainers!’, Mr Reynolds said: “I have decided that if I am ever put in charge that I would like to line all the UK’s copycat complainers up against a wall; tell them that I have had enough, and shoot them myself.

He added: “Of course, that is a joke. I don’t own a gun, never want to, and would rather use a sledgehammer.

“The reason why I want rid of these people is simple. Just as I take the freedom to walk across a picket line as seriously as the right to stand on one; the freedom to express jokes and opinions is very dear to me.”

Mr Reynolds, who himself joined last week’s public sector walkout, said: “The moment creativity is constrained by the opinions and values of copycat complainers, religious fanatics or people trying to sell newspapers; we are in seriously deep trouble.”

One fellow worker, who did not wish to be named, said: “I have been a public sector worker for 15 years and having experienced threats of violence, I found Jeremy Clarksons’s attempts at humour sad.”

However Mr Reynolds is not a comedian and speaks with authority on a number of issues.

“The problem is that the language of aggression through Jeremy Clarkson’s comments may be seen as acceptable forms of communication and certainly Mr Reynold’s comments are deplorable.

“I would hope that his employers and the hosts of the blog consider appropriate action.”

Mr Reynold’s reportedly removed an earlier part of the post which said: “Anyone who is unable to work out that you really don’t have to be offended by what is clearly humour and complains is clearly broken and doesn’t deserve to live.”

The blog was posted on the Northings, a website for arts and culture in the Highlands.

The site’s editor said Mr Reynolds was posting in a personal capacity.

Inverness councillor Donnie Kerr said: “If you are putting comments on a public forum that can be seen by a number of people you should be careful what you put up, especially in humour as people might not take it as humour.”