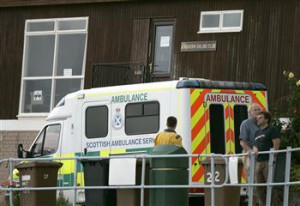 PROSECUTORS have ruled out holding a fatal accident inquiry into the death of a woman which sparked the row over ambulance crew rest breaks.

The family of Mandy Mathieson, who suffered a heart attack just ‘two minutes away’ from an ambulance depot, have been told there is no legal justification for an inquiry before a sheriff.

The row blew up after a relief ambulance technician, based in Tomintoul, Moray, ‘chose’ not to respond to a 999 call from Miss Mathieson’s partner because he was on a rest break.

Another ambulance crew had to drive from Grantown-on-Spey, 15 miles away, in a journey which took 21 minutes.

When paramedics arrived at her home in Stewart Place, Tomintoul, they found her partner, 30-year-old Bobby Taylor trying to rescuscitate her after she suffered a cardiac arrest.

The death of 33-year-old Miss Mathieson, in October last year, led to calls for a review of the Scottish Ambulance Service’s rest breaks procedure.

The dead woman’s  brother, Charles, said: “We spoke to the procurator fiscal and he said that what the ambulance crew did or didn’t do wouldn’t have had any bearing on Mandy’s death.

“Legally, there is no justification for a fatal accident inquiry. He was very sympathetic and very supportive.

“I am not surprised. What we said as a family is that we are not worried as long as the right outcome is achieved.”

A new policy on ambulance crews breaks, dubbed the Agenda for Change, was introduced in 2004.

It gave crews the right to an undisturbed 30-minute-break. If they opted out they would get an annual payment of £250 and £5 every time they were disturbed.

Unions rejected an offer to give ambulance technicians extra pay if they worked through their tea breaks.

A temporary agreement was put in force in October.

Discussions about a change are expected to begin again this month, but Miss Mathieson’s family say the situation is ‘ludicrous’.

Charles said: “What I would like to see is the people who set up the Agenda for Change taken to task.

“It’s really difficult but at the end of the day so is their job and there has got to be compromise.

“The whole situation is absolutely ludicrous.

“The frustration for me is that this has been happening since 2004.

“For us, whatever happens is too little too late. It’s been more than a year.

“We still want something to change. We will keep pushing.”

A spokesman for the Crown Office said: “Following an investigation by the procurator fiscal, a report was sent to the Crown Counsel for consideration as to whether any further action would be appropriate.

“After careful consideration Crown Counsel have concluded that a fatal accident inquiry will not be held in this case.”